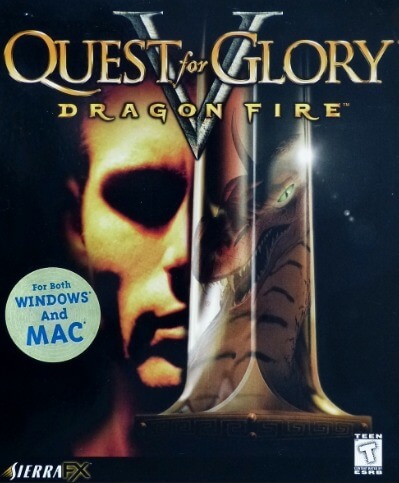 Quest for Glory V: Dragon Fire is the fifth and final game in the Quest for Glory computer game series by Sierra FX, the former "sub brand" of Sierra Entertainment. Unlike the first four games, Dragon Fire is primarily an action role-playing game with some elements of graphical adventure.

Dragon Fire retained its point-and-click graphical interface, and introduced a new combat system. Previous entries had moved combat encounters to a separate, isolated combat screen, but Quest for Glory V's interface allowed for these battles to take place in the same environment as the rest of the gameplay.

Quest for Glory V provided more variety in the form of story paths, sidequests, and puzzles, than its predecessors.

The wizard Erasmus introduces the player character, the Hero, to the Greece-like kingdom of Silmaria, whose king was recently assassinated. Thus, the traditional Rites of Rulership are due to commence, and the victor will be crowned king. The Hero enters the contest with the assistance of Erasmus, Rakeesh, and many old friends from previous entries in the series. The Hero competes against competitors, including the Silmarian guard Kokeeno Pookameeso, the warlord Magnum Opus, the hulking Gort, and the warrior Elsa Von Spielburg, who played a significant role in the first game.

As the Rites commence, an unknown assassin begins systematically picking off the contestants. Each contestant is murdered by a poison dagger, and they all are murdered near Dragon Pillars, the objects used to keep the Dragon of Silmaria locked up. After completing the second Rite, defeating the General of the Mercenaries, Rakeesh is attacked by the assassin and, depending on the course of action chosen by the player, either lives or dies. The conspiracy is eventually unraveled and the Dragon, having been released due to the destruction of the Dragon Pillars, is defeated.

The characters Katrina and Erana make a return in this installment, as assistance for defeating the Dragon.

This installment also marks the return of Bruno, a character from the first Quest for Glory game. He is revealed to be the assassin who has been terrorizing the streets of Silmaria, characterized as a quiet, shady character until he reveals himself to the player.