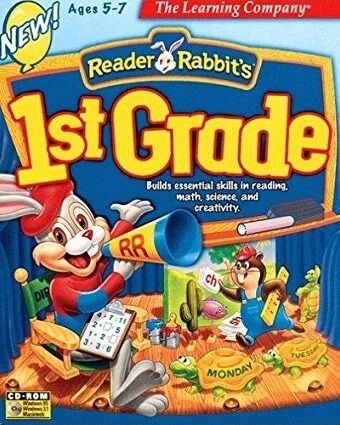 Reader Rabbit: 1st Grade is an educational video game, part of the Reader Rabbit series, developed by KnowWare and published by The Learning Company on January 6, 1998. The game was re-released on the Nintendo Wii by Graffiti Entertainment on May 4, 2010.

The Old Theatre has everything ready for a performance. However the porcupine Spike feels dissatisfied about not being the star of the show, so he takes and hides the musical instruments, costumes, scripts, props and other necessities so the performance cannot start. Reader Rabbit and his friends have only a number of hours to make preparations before tonight's performance.

The players encounter interesting characters and take part in educational activities through the game's point-and-click interface, with a goal being to get everything ready for the show. The game focuses on vocabulary, phonics, addition and subtraction.

Common Sense Media said the game has a "nice mix of animation, song, and solid educational gaming", and declared it the "top first-grade title". Superkids deemed it "lightweight", "lively", and "entertaining". Tech With Kids thought the activities were "supportive, funny, and always upbeat"., and described the learning activities as "fabulous". Edutaining Kids thought the game was highly entertaining and positively compared it to Reader Rabbit Reading Learning System. Discovery School praised the game for its "exciting adventure storyline", "gorgeous cartoon world to explore", and "outstanding learning activities". The Washington Post said "this title makes the grade", unlike other Reader Rabbit titles. USA Today thought the game wasn't perfect, as the controls do not make good use of the Wii's capabilities. Reading Tutor said the game was a prime example of how Reader Rabbit puts "educational games in the context of an interesting story line." Jeffrey Kessler who worked as a Learning Specialist for the Reader Rabbit franchise described the game as a clever mix of math, reading, art and emotion rather than a year's curriculum.

The Night of the Rabbit
hit
upd
new