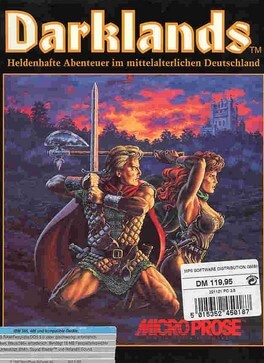 
Darklands is a role-playing video game developed and published by MicroProse in 1992 for the PC DOS platform, and re-released on Gog.com with support for Windows, macOS, and Linux. Darklands is set in the Holy Roman Empire during the 15th century. While the geographic setting of the game is historically accurate, the game features many supernatural elements.

This type of gameplay is an early example of open world in role-playing video games. The player is free to complete quests that will give them a positive reputation, or to pursue a negative reputation by performing evil deeds. In Darklands the player's reputation is limited geographically, allowing the player to be simultaneously hated in one region and exalted in another.

The setting for Darklands is medieval Europe as the inhabitants thought the world was at the time. All the cities that one's party may visit in the game are real places that existed in the Holy Roman Empire of the 15th century. Most are in modern-day Germany, but some are within the modern borders of other countries including Denmark, Netherlands, Luxembourg, France, Switzerland, Austria, the Czech Republic and Poland. The city names given in the game are old German names of the cities, some of which are now exonyms; the new local names are given in parentheses.

There are no other species available in character creation—all players are human and are differentiated by occupation. Any party member is capable of performing what are known as class-based feats in many other role-playing games, but skillful players usually improve the party member's skills only in the appropriate area. Thus, the equivalent of a cleric in this game would be someone who specializes in religious studies as well as healing skills. Because the character specializes in the above, however, does not preclude him or her from learning artifice skills, such as lock picking. Age is a factor, as characters will begin to lose physical prowess as they age. However, the older the player is when the character is generated, the more skills and better equipment he or she starts with.

While the majority of the game uses text-based menus—enhanced with hand-painted illustrations describing the player party's available actions, the party's movement between cities and during battle uses a graphical user interface. The real-time combat is dependent not only on the characters' skills, but also the type and quality of weapons used against the enemy and its armor. For example, using swords against plate armored foes would be less effective than using hammers or maces.

The game is set in a historical fantasy version of medieval Europe, where monsters and magic actually exist. The plot is not linear and there is no set path for a player to follow.citation needed

However, there is a main quest to follow in order to finish the game, which involves hunting witches and heretics. Darklands ends once the final battle is completed against the demon lord Baphomet, preventing the apocalypse. Baphomet can be found in a castle in an obscure part of the game map which can only be found after finding and defeating the evil occupants of various other fortresses around the game, in which the party can find information which will point it to the final location. According to the official clue book for the game, the final battle location, as well as the location of some other quests in the game, is randomized at the start of each new game.