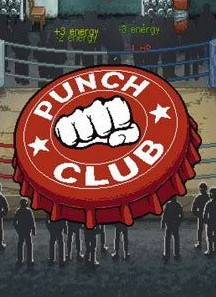 Punch Club (originally titled VHS Story) is a sporting management simulation developed by Lazy Bear Games and published by tinyBuild. In the game, the player manages an upcoming boxer in training and preparation for a series of boxing matches at a local club, while searching for clues of who killed their father. The game was developed as a humorous take on action films of the 1980s and 1990s. The game was released in January 2016 for Microsoft Windows, OS X, iOS, and Android, following a Twitch Plays Pokémon-style event on Twitch. A Nintendo 3DS port of the game was announced in a September 2016 Nintendo Direct for release in January 2017 after some delays. Ports for PlayStation 4 and Xbox One were released on March 31, 2017. A Nintendo Switch version was released on May 24, 2018.

The player controls an unnamed boxer whose father, who helped to train him, was murdered. The boxer aims to continue his training and become the best boxer at a local league, while following clues to lead him to who killed his father. The player manages the boxer around the clock through various locations in a city, including his home, the boxing gym, stores, and his work place. Time progresses when the player is involved in any activity, including moving between these locations.

The boxer character has three primary attributes that contribute towards his skill in boxing and how other boxers are compared: strength, agility, and stamina. These attributes start at one but can be increased by performing various activities, such as exercising or going to work. However, performing these activities will wear away at other attributes, including hunger, alertness, and happiness, and if these attributes are too low, some activities may not be available. These lesser attributes can be regained through eating, sleeping, and other events, though the main boxing attributes will slowly degrade with game time.

The boxer will gain friends or other associates over the course of the game which will help also lead the character towards resolving the mystery of his father's murder, perform new activities to help raise the primary attributes, or aid in boosting the lesser attributes. Further, many activities require in-game money, which the player earns through performing work or by winning boxing matches. Thus, the player must determine how to balance the character's activities with the limited in-game time to maintain sufficiently high boxing attributes as to advance up in the boxing ranks. The game has a quest system, but many quests are optional. The game has several possible endings, depending on choices players make.

When the player opts to send the character into a fight, or when the character is forced to fight, the game then allows the player to equip the boxer with a limited number of boxing skills that they have learned to that point including punches, kicks, and blocks; these skills can be swapped out between boxing rounds and these kicks and punches crushes enemy stamina and help occupy a limited number of slots, which brings in a smart, simple and strategic layer to Punch Club. Opponents will also have a similar set of skills, which the player can examine between rounds. Some skills require the player to have a high enough primary attribute to be used, while the effect of others is based on the value of these attributes. Once the player has selected these skills, the round is executed automatically by the computer during the next round. The moves for each fighter during the round are randomly drawn from those selected. The goal is to reduce the health of the opponent to zero before the boxer's is reduced, or before twenty rounds are completed, in which a decision is made by the game as to who won the match. New skills are gained as the player completes more of the game, making them a more adept fighter.

The game itself is written with numerous references to 80s and 90s fighting movies, including references to the Rocky films, Fight Club, Teenage Mutant Ninja Turtles, and other works.