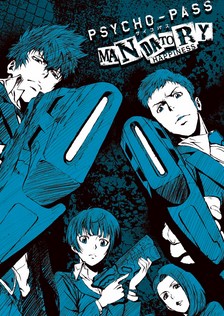 Psycho-Pass: Mandatory Happiness (Japanese: サイコパス 選択なき幸福 Hepburn: Saiko Pasu Sentaku Naki Kōfuku) is a visual novel video game developed by 5pb. It was originally released for the Xbox One in 2015 in Japan, with PlayStation Vita and PlayStation 4 versions following in 2016 in Japan, North America and Europe. A Microsoft Windows version was released on April 24, 2017. The game is based on the 2012 anime series Psycho-Pass.

The story's backdrop is a dystopian future Tokyo where people can be preemptively imprisoned for their propensity to commit crimes, based on a technology-enabled personality scan called a Psycho-Pass. The game takes place in a timeline within the anime's first 12 episodes. The player controls one of two characters: inspector Nadeshiko Kugatachi, who is missing memories of her past, or enforcer Takuma Tsurugi, whose lover is missing. The antagonist is a rogue artificial intelligence named Alpha, whose objective of bringing happiness to individuals through unsanctioned means brings him into conflict with the government. Alpha attempts to provide happiness through chemical control, mass manipulation, and eventually by reducing the human population. The three characters do not appear in the anime series; the story runs parallel to the TV show's.