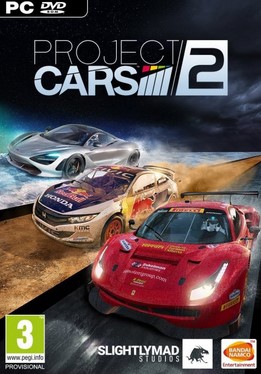 Project CARS 2 is a motorsport racing simulator video game developed by Slightly Mad Studios and published and distributed by Bandai Namco Entertainment. It was released worldwide on 22 September 2017, for Microsoft Windows, PlayStation 4, and Xbox One.

Project CARS 2 offers 140 track layouts at 60 different locations and 189 cars to choose from. It advertises that "each track is a living, organic venue" and "changes lap by lap" as the race progresses. This is achieved by a system called LiveTrack 3.0, including e.g. track temperature or dynamic weather. The game now features off-road driving, including rallycross tracks and cars. There are new manufacturers in the game, including: Porsche, Ferrari, Lamborghini, Jaguar, Honda, Acura and Nissan. In addition, Project CARS 2 supports virtual reality (VR), up to 12K resolution, and triple screen support.

Soon after the success of Project CARS after the May 2015 release, funding began to open for Project CARS 2 on 23 June 2015. World of Mass Development and Slightly Mad Studios opened donations through the "Project CARS 2 official forum". Forum members and visitors choosing to donate had the option to using membership through the forums. In exchange, donors could gain access to development builds and voicing thoughts, opinions, and suggestions critical to the progress of the game.

On 8 February 2017, Project CARS 2 was officially announced as a game coming late 2017. Slightly Mad Studios soon revealed that the game was going to compose of 182 cars from 38 manufacturers and a variety of car and race car classes, new additions including the Honda Civic, Jaguar XJ220, Toyota GT-86 and Nissan R89C. The game also has a larger track roster, with 46 tracks (containing 121 layouts), the majority being laser scanned circuits, and new additions including Fuji Speedway, Knockhill, Long Beach and the Dirtfish rallycross track. A new time and weather system have also been included in-game which can allow multiple different changing weather conditions and changes within a given season (winter, spring, summer, autumn).

A new game physics engine called LiveTrack 3.0 has also been included, bringing realistic track conditions throughout a race weekend. Online mode has also been developed with a focus on esports, bringing an online ranking system, online championships, and better functionality in matchmaking. They also developed a partnership with IndyCar, which includes all the lineup of the 2016 season, the official logo and the Indy 500.

Through the months leading up to a release, Slightly Mad Studios have worked closely with auto manufacturers, auto industry companies, and race car drivers to help them in making an accurate simulation. As a result, cars have specific performance characteristics and represents its real-life counterpart accurately. The tyre physics have also been built from the ground up, with more advanced tyre movements and actions.