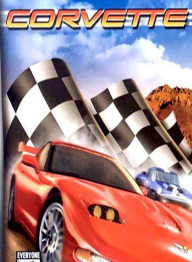 Corvette is a 2003 racing video game developed by Steel Monkeys' Glasgow and Minsk studios in which players race in cars from the 1950s and unlock cars in career mode to race cars from 1953 to 2003. Players can customize cars to fit their driving style. The game features traffic and policemen. The tracks come from Chicago and go to L.A. The game was released on Xbox, Game Boy Advance, Windows, and PlayStation 2.

The racing format for this game contains Quick Race, Arcade, and Career mode. On the Arcade and Career modes, it starts in the first generation of Corvette in a series of races. There are several series of racing for all generations of Corvette. As you win races, you earn minor upgrades for your car. At the end of a section of that generation of Corvette, it goes on One-on-One race on the open road to win a trophy. If you do win, it will go to the next generation and its races. When completed, the gamer will unlock many cars, customized parts, and tracks for Quick Race.