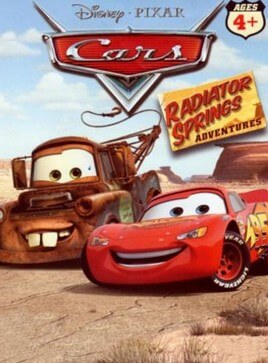 Cars: Radiator Springs Adventures is a computer game collection by American studios AWE Games and Rainbow Studios based on the Disney/Pixar film, Cars. The platform it is designed for is the Windows/Macintosh. It was released in 2006. Published by THQ,Inc. It was intended for the early childhood market, ages 4 and up. There was another version released in 2006 exclusively to Target stores. It was more of an arcade style version made for all gaming systems. This version is for the PC/Mac.

The game consists of 10 activities and 10 championship races when players beat the activity's 5 levels. When players complete all activities, they compete in a championship race against another character. In those races, the transmission is manual, not automatic. There is no free drive like in Cars: The Video Game, it just drops McQueen onto a random area and he just drives there to the activity players choose. Each activity has instructions on how to do this and memorization is required to play a game like this. All games use the mouse controls or holding down the arrows. In this game, you are Lightning McQueen, a race car and the hero of cars interact with him. They interact in a series of activities and races around Radiator Springs. There are about 10 activities. Some of the activities are based off Lightning's friends, Ramone a low rider, Sarge's Boot Camp, Speed Trap Sheriff, Toe the Line Mater, and a few more. After successfully completing these activities Lightning has to defeat others in the Rev It Up Drag Races. If you win all 9 races, you will compete with Chick Hicks, Lightning's arch enemy.