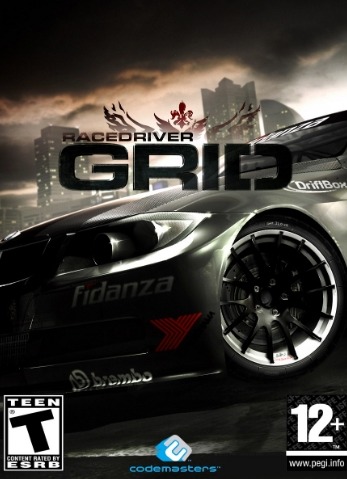 Race Driver: Grid (or simply Grid) is a racing video game developed and published by Codemasters for Microsoft Windows, PlayStation 3, Xbox 360, Nintendo DS, Arcade and OS X. It is the seventh game in the TOCA series. A Java ME version by Glu Mobile is known to exist, but is now obsolete.

Grid was developed and published by Codemasters, the creators of the TOCA series. It is a game in which the player runs their own race team, acting as the primary driver. As players progress they gain sponsors and can hire a teammate to drive alongside them in certain events.

The game begins with the player accepting jobs to drive for other teams to earn money, and once the player gains enough capital they can purchase their own vehicles and drive independently, as well as continuing to drive for other teams should they choose to. Grid features a gameplay mechanic known as Flashback which allows the player to rewind gameplay by up to ten seconds and resume from their chosen point. This is a limited-use feature, determined by the difficulty setting.

Grid features several modes of competition using various cars. Three main regions are found in the game, United States, Europe, and Japan, each with their own championship. Each of the game's 43 cars are tied to one of these three regions. Grid also features several types of events to compete in, including GT championships, drifting, touge, open wheel racing, and demolition derby, as well as variants on several of these motorsports. Players can also participate in the 24 Hours of Le Mans at the end of each racing season.

Courses in the game are a mixture of real world and fictional circuits and point-to-point tracks. Real road courses such as Le Mans and Spa Francorchamps are included, while some defunct street circuits such as the Detroit street circuit in Michigan and the Washington D.C. street circuit are also included. There are also several fictional tracks inspired by real-world locations and circuits, such as street courses in San Francisco, California and Milan, Italy as well as Mount Haruna.

The Nintendo DS version is a racing simulator consisting of 20 available circuits across Europe, Japan and the US, along with 25 cars to choose from. The game also includes an updated version of the track designer from Race Driver: Create and Race, which allows players to create their own custom circuits and roadside billboards. The game also features vehicle customization and online multiplayer.

On 19 September 2008 Codemasters announced that they would be releasing three DLC (Downloadable Content) packs, the first of the three was released on 4 December 2008, the 8-Ball Pack was released on the Xbox Live Marketplace and the PlayStation Network. The pack contains eight new cars, these include the McLaren F1 GTR, TVR Cerbera Speed 12, Mitsubishi Lancer Evolution X, Honda S2000, Nissan GT-R (S-G2008), VW Nardo, Pontiac Firebird and the Volvo C30. The 8-Ball Pack also comes complete with two new multiplayer events set on existing circuits from across Grid's three continents. On 4 March 2010 the second DLC pack dubbed the Prestige Pack was released (for the PS3 only). The pack adds Mount Panorama Circuit and ten cars, including the Ferrari F430 GTC, Bugatti Veyron and Ferrari F575 GTC.