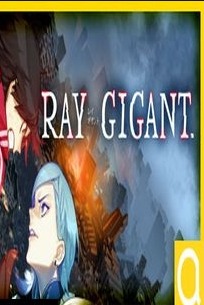 Ray Gigant (Japanese: レイ ギガント Hepburn: Rei Giganto) is a role-playing video game developed by Experience. The game was published in Japan by Bandai Namco Entertainment in 2015, and published digitally in North America and Europe by Acttil on May 3, 2016.

The game plays as a dungeon crawler JRPG. Contrary to genre standards, the game will contain no random battles, and a heavier focus on narrative than usual. The game's battles are turn-based and similar to the system found in the game Bravely Default, where the player has a certain allocation of moves that can be made, which can either be saved up into a large number, or used up all at once, leaving the player unable to act for a period. Certain segments in the battles called "Slash Beat Mode" have beat-driven mechanics similar to Rhythm Heaven series of games.

The game takes place in a fictional, future version of Tokyo that has been left in ruins due to the invasion of space aliens called "Gigants". While the entire Earth has been largely laid to waste, before complete destruction, the game's primary character, Ichiya Amakaze, is finally able to defeat a Gigant with a mysterious power called "Yorigami". However, at the same time, the uncontrollable nature of the power also accidentally destroys an entire city, leaving the characters of the game to figure out how to handle this ability". The game is split into three separate chapters, each focusing on a separate protagonist, Ichiya Amakaze, Kyle Griffin, and Nil Phineas. Each protagonist will also team up with two other side characters during their side of the story, Ichiya teaming up with two characters named Mana Isano and Kazuomi Miwa.

Ray Gigant holds a score of 72/100 at the review aggregator Metacritic, indicating generally positive reviews. The game debuted at number 9 on the Japanese sales charts, selling 8,673 copies in its first week of release. Hardcore Gamer was generally favorable in its assessment of the game, concluding that the game "takes some risks in game design to create a unique JRPG experience. Some of these are executed better than others, but the overall game is solid. It does take about two hours to really show its potential, but the payoff is worthwhile for JRPG fans... the developers were able to combine the influences and create a fresh experience. The storytelling emphasis may seem excessive to some, but it was able to hold this reviewer’s interest..." RPG Site was similar in their assessment; while they praised the game for being "an interesting mesh of dungeon crawling and visual novel elements" while containing unique combat and great presentation, but chided the game for its "repetitive nature" and "lack of challenge". Kotaku specifically praised the game's fluid animations and two-dimensional art style.