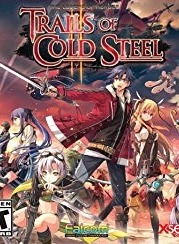 The game plays very similarly to the original Trails of Cold Steel game, playing as a traditional JRPG with turn-based battles. The game is not, however, tied to the school schedule structure of the original, with the game now centered around traveling the world rather than attending classes. If the player has a completed game save file from completing the prior game, it has an effect on the game of Cold Steel II, with certain events and dialogues playing out different based on choices and relationships built in the prior game.

The game is a direct sequel to the original Trails of Cold Steel, and begins one month after its ending. Rean Schwarzer has escaped alongside his Divine Knight, Valimar. He makes it to his hometown of Ymir with the assistance of bracer Toval, but Rean quickly finds hims and his loved ones caught in the crossfire of the Erebonian civil war. Rean's opponents are the Noble Alliance, which has partnered with the Imperial Liberation Front from the previous game, as well as Ouroboros - a recurring group of antagonists in the Trails series. Students from Thors Military Academy, including those from Class VII, had been scattered across the country, so Rean attempts to get everyone back together again to put an end to the civil war and save those he cares about.

Cold Steel II uses the PhyreEngine game engine, and was released in Japan on September 25, 2014. The game was localized into English by Xseed Games. Work on translating the game began on February 2015, containing around 1.45 million characters to be translated. Translating alone took around a year, with it being about 95% complete in January 2016. Xseed also added approximately 11,000 lines of English dialogue for its English release. The game was released in North America on September 6, 2016, and in Europe on November 11, 2016. A port for Microsoft Windows was released on February 14, 2018, and features various enhancements from the original version, such as support for 4k resolution, various other graphical enhancements, and additional English voice acting. A remastered version for the PlayStation 4, The Legend of Heroes: Trails of Cold Steel II: Kai, was released in Japan on April 26, 2018, and in North America and Europe in June 2019.

The game received "generally favorable" reception, according to review aggregator Metacritic. Chris Shrive of Hardcore Gamer strongly praised the game for being "a modern JRPG masterpiece" with "the perfect blend of the classic JRPG formula mixed with contemporary features" concluding that "the emphasis on story telling and immense cast of memorable characters make the large time commitment worthwhile." Kimberly Wallace of Game Informer was similarly positive about the game's story and characters, but complained of the game's dull dungeons design. Despite the shortcomings, she still felt that the game "takes the cast and story in such interesting directions and provides so much to do that it’s hard to put down...the game makes me care so much about the characters and the world that it becomes easier to look past its flaws." Darren McPhail of RPGSite was similarly positive about the game, stating "For fans of the previous Legend of Heroes games and especially the first Trails of Cold Steel, picking up Trails of Cold Steel 2 is a no-brainer easy recommendation. While this sequel is unevenly paced and lacks shocking plot twists until the conclusion, the Trails of Cold Steel games are some of the best of the genre and well worth a look for most hardcore RPG fans." All three reviewers agreed that, while it was possible to enjoy the game's story as a stand-alone experience, the story was better for people who had played the original Trails of Cold Steel first, due to the games' direct ties to one another.

In Japan, the game sold 86,283 physical retail copies on the PlayStation Vita and 65,498 retail copies on the PlayStation 3 within its debut release week. Within that week, the Vita version placed second among all software sales in Japan, while the PS3 version placed fifth. Famitsu gave both versions of the game a review score of 31/40. The PlayStation 4 version sold 11,345 copies during its first week on sale in Japan, placing it at number ten on the all format sales chart.

(0) Comments on "The Legend of Heroes: Trails of Cold Steel II Full Version"