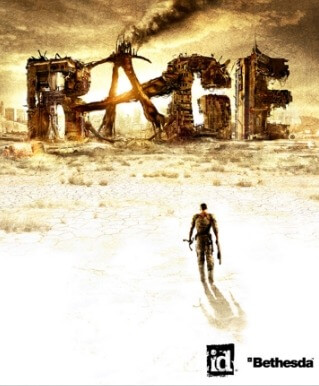 Rage (stylized as RⒶGE) is a first-person shooter video game developed by id Software, released in November 2010 for iOS, in October 2011 for Microsoft Windows, the PlayStation 3, and the Xbox 360, and in February 2012 for OS X. It was first shown as a tech demo at the 2007 Apple Worldwide Developers Conference and was announced at the QuakeCon. Rage uses id Software's id Tech 5 game engine and was the final game released by the company under the supervision of founder John Carmack.

Rage is set in a post-apocalyptic near future, following the impact of the asteroid 99942 Apophis on Earth. Players take control of Nicholas Raine, a soldier put into hibernation in an underground shelter who emerges into the wasteland a century later, and finds himself a wanted man by an oppressive organization known as The Authority. The game has been described as similar to the movie Mad Max 2, and video games such as Fallout and Borderlands.

Rage received mainly positive reviews, with reviewers praising the game's combat mechanics and graphics while criticizing the lack of story, characters, and direction. The iOS version, titled Rage: Mutant Bash TV, was also released in 2010. A sequel, Rage 2, was released on May 14, 2019.

On August 23, 2029, the asteroid 99942 Apophis collides with Earth, destroying human civilization and turning the world into a wasteland. Survivors come together to form settlements around oases and other practical or habitable locations, while the wastes are plagued by various bandits clans, and mutants, who attack all normal humans in a voracious horde.

In 2135, former U.S. Marine Lieutenant Nicholas Raine emerges from an underground shelter called an Ark, 106 years after being put into stasis. These underground shelters are the direct result of the Eden Project, a massive international undertaking in which hundreds of Arks, containing cryogenic pods, were sealed under the surface of the Earth to preserve enough of the human population to rebuild civilization after the asteroid collision. The Eden Project was far less successful than hoped, as Raine's Ark in particular was heavily damaged, with all of its other residents dead and equipment destroyed, and he wakes up alone with no specific goal in mind.

Raine enters the surface, where he is immediately attacked by bandits but is saved by Dan Hagar (voiced by actor John Goodman), a local wasteland settler who brings Raine to his settlement. Hagar informs him that a powerful technologically advanced organization known as the Authority, that considers itself the one true government of the wasteland, is hunting for Ark survivors for an unknown purpose. Raine briefly aids Hagar's settlement and others in the local area by completing a few small jobs, and during this time it is revealed that the nanotrites injected into Raine's blood before he was sent into hibernation have granted him superhuman abilities to help him survive the harsh environment, but have made him valuable to the Authority. Hagar believes Raine's continued presence is too dangerous for the settlement and sends him to the nearby town of Wellspring instead.

In Wellspring, Raine helps the town with various problems such as fighting off bandits, mutants, and ferrying supplies. Eventually, he comes into contact with Dr. Kvasir, an elderly scientist who previously worked for the Authority, who tells Raine about the inhumane experiments they were responsible for, such as the creation of the mutants. Kvasir puts him into contact with the Resistance, an armed anti-Authority group, where he is tasked with rescuing their leader, Captain Marshall, who has recently been imprisoned by the Authority. Raine again attracts attention from the Authority, forcing him to flee Wellspring and join the Resistance at their headquarters in Subway Town, where he earns the trust of the town and its tyrannical mayor, Redstone. He also learns what had happened in the past century from Captain Marshall, who is an Ark survivor himself. General Martin Cross, who was in charge of the Eden Project, sabotaged the operation shortly before 99942 Apophis struck the Earth by ensuring that only the Arks with people loyal to him were opened on schedule, with this first wave of Ark survivors eventually forming the Authority. The remaining Arks were supposed to stay underground forever in hibernation, including Raine's Ark, which surfaced only because its systems were damaged and it automatically rose to protect any surviving inhabitants.

With the Authority beginning to forcefully expand its influence on the wasteland settlements, the Resistance is forced to act with the help of Raine who can recover data that shows the location of every Ark on the planet. Captain Marshall plans to use this data to activate all the Arks and form an army that can defeat the Authority, but the only way to do this is to transmit the data from Capital Prime, the main headquarters for the Authority. Alone, Raine fights his way through Capital Prime to transmit the Ark activation code, and the game concludes with all the remaining Arks simultaneously becoming active and surfacing.