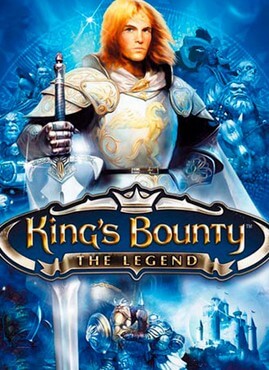 King's Bounty: The Legend is a tactical role-playing video game developed by Russian studio Katauri Interactive and published by 1C Company for Microsoft Windows and Mac OS X in 2008. The game is based upon the King's Bounty property released by New World Computing in 1990, and blends elements of the original game with a modernized interface and gameplay elements. The game's story sees players taking on the role of a special treasure hunter for a king, who soon becomes embroiled on a quest to save their daughter and prevent their world from being destroyed.

Since its release, the game has received favourable reviews, and received a number of sequels using the same engine. These include King's Bounty: Armored Princess, King's Bounty: Warriors of the North, and King's Bounty: Dark Side. In 2019, a sequel, King's Bounty 2, was announced, with a new engine and a shift to a grittier, more open-world cinematic experience; it is scheduled for release in 2020.

In King's Bounty: The Legend, the player plays as a hero in the world of Endoria, sworn to serve the king of Darion. After a brief "final exam" tutorial at the School of Knights, the player receives some basic troops and is then set free to pursue whatever quests are desired. The king provides the main story quests, but there are numerous side quests which can be completed as well, in virtually any order.

The player's character cannot directly fight in battles, but rather employs up to five squadrons of allies to do so. These range from the mundane (e.g., peasants or archers) to creatures from high fantasy (e.g., griffins, beholders or ents), and can vary in size from just a single unit all the way up into the hundreds. Troops are recruited from various locations in the game, with a limit on the maximum size of each unit determined by the character's "Leadership" statistic. In combat, troops are then assisted by the player's character through the use of magic (spells and scrolls), Spirits of Rage and passive bonuses.

While not in combat or visiting a specific location, players move on the overworld map in real-time, although with the ability to pause. Hence, enemy groups shown on the map will move towards the player if close enough, initiating combat if they touch the player's avatar. Otherwise, players are free to move throughout the various game locations while day and night slowly cycle, without any concept of turn-based play. Treasures and other items can be picked up by directing the player's character towards them, and non-hostile characters can be interacted with by similar means, usually to make purchases or as part of a quest.

King's Bounty: The Legend allows players to play as one of three different character classes, from the choices of warrior, paladin, and mage. Each class specializes in one of the three skill trees in the game, although players are allowed to cross-specialize. By allocating runes received as treasure or after gaining a level, players choose which skills to focus on.

The Spirits of Rage are a group of four powerful creatures trapped in the magical "Rage Casket" eons ago by ancient sorcerers. Bound to the chest, they are required to obey its master, carrying out his bidding by briefly manifesting in the physical world to smite enemies. The spirits are not available at the beginning of the game, but instead only become available after a certain central quest has been completed. Additionally, the player has to complete a special quest for each spirit in order to obtain its help, and some of these quests will only become available as the plot progresses.

In terms of game mechanics, the Spirits of Rage are, technically, self-upgrading spells. Each spirit possesses four different abilities (spells), becomes more powerful or less expensive to call upon as it grows more experienced, and receives experience from killing enemies. Each spirit gains experience independently, and each ability is upgraded separately.

Using these abilities depletes the character's rage, which can only be increased in combat, by killing enemy units or by taking casualties. Casualties will generate more rage, thus extensive usage of Spirits of Rage is only possible in difficult battles, where a large number of troops wind up perishing. Between battles rage cannot be stored for long, as it slowly depletes over time until reaching zero.

All games from the serie "King's Bounty"