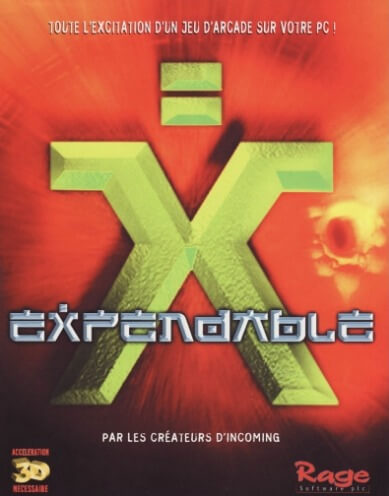 Millennium Soldier: Expendable is a Run and Gun video game that was released by Rage Software for Microsoft Windows in 1999. It was later ported to the Dreamcast and PlayStation consoles. A remake of the game, entitled Expendable: Rearmed, was released for Android in 2012. It is in the format of a modern arcade game. The player starts with 7 "credits" and can continue until running out of credits. A second player can join the game at any time by pressing start.

Expendable takes place sometime in the post-apocalyptic future, where most of the galaxy was conquered by a hostile alien race. To combat the aliens, scientists had developed a "Millennium Soldier" project by cloning two super-soldiers. Like most top-down run and gun video games, Expendable has collectible upgrades and weapons, and features common aspects like bosses and levels, familiar with most games of this type.

Next Generation reviewed the PC version of the game, rating it three stars out of five, and stated that "All in all, a smart little shooter, but one with limited appeal in the PC market."

Jeff Lundrigan reviewed the Dreamcast version of the game for Next Generation, rating it one star out of five, and stated that "Stay away. Star far, far away."

Expendable received generally mixed reviews from critics. Edge praised the game's graphics, stating that "the textures are near works of art, aided by colour lighting, true shadows and ubiquitous explosions."