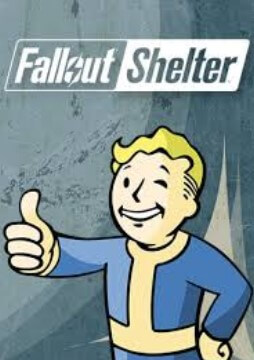 Fallout Shelter is a free-to-play simulation video game developed by Bethesda Game Studios, with assistance by Behaviour Interactive, and published by Bethesda Softworks. Part of the Fallout series, it was released worldwide for iOS devices in June 2015, for Android devices in August 2015, for Microsoft Windows in July 2016, Xbox One in February 2017, and PlayStation 4 and Nintendo Switch in June 2018. The game tasks the player with building and effectively managing their own Vault, a fallout shelter.

Upon release, Fallout Shelter received mostly positive reviews. Critics enjoyed the game's extension of the Fallout universe, the core gameplay, and its visual style. Common criticisms included the game's lack of depth, its use of unnecessary microtransactions, and its lack of an ending. The game grossed US$5.1 million (equivalent to about $5.4M in 2018) in microtransaction sales in the first two weeks after its release.

In Fallout Shelter, players build and manage their own Vault as an Overseer – the leader and coordinator of their Vault. Players guide and direct the citizens of the Vault, and need to keep them happy through meeting their needs such as power, food, and water. They rescue dwellers from the wasteland and assign them to different resource-generating buildings in the Vault, using the SPECIAL statistics system from the other Fallout games. Each character's SPECIAL profile affects their ability to generate different resources, and their statistics can be increased by training them in rooms devoted to each stat. The dwellers can level up over time, increasing their health, and can be given new items and weapons to help with various tasks. The number of dwellers can be increased by waiting for new dwellers from the wasteland to arrive or by pairing a male and a female dweller in living quarters to produce babies.

Balancing resources such as food, water, and power is an important aspect of the game. Many different rooms can be built in the Vault, providing different items or stat bonuses. Players are not required to spend money in order to accelerate long timers or processes, instead having the option to instantly complete tasks at the risk of catastrophic failures – such as fires or "radroach" infestations. Players are sometimes rewarded with lunchboxes that contain rewards, such as items or resources, which can be purchased separately through microtransactions.

In a 2009 interview with Engadget, while talking about a possible Fallout game for iOS, Bethesda's Todd Howard said that the world of Fallout was "unique enough that it could translate to any platform", revealing that several designs of an iOS Fallout game were pitched and rejected. On November 5, 2009 John Carmack, who at that time worked for id Software, said that while it was nothing official yet, he had an internal proof of concept made for a Fallout iPhone game. Carmack said that he would likely be personally involved in making the game, although at the time he was working on other projects. He added that "at the very least I'm going to be providing code."

Fallout Shelter was announced by Bethesda during its press conference at the Electronic Entertainment Expo on June 14, 2015, where it was confirmed the game is a free-to-play title that would be released for iOS the same day. It was developed in a partnership with Behaviour Interactive, and was built using the Unity game engine. The game was also released for Android devices on August 13, 2015.

According to Pete Hines, vice president of Bethesda, the game is inspired by other video games like Little Computer People, Progress Quest, XCOM, SimCity and FTL: Faster Than Light.

On June 30, 2015, the game added a character from Fallout 4 as a dweller for the first time. Preston Garvey, the leader of Commonwealth Minutemen, was added as a reward available from lunchboxes, along with his Laser Musket weapon, which can be equipped by other Vault dwellers. On July 10, 2015, the game received its first update which fixed some problems while adding a new "Photo Mode" feature that allows players to capture and share images of their Vault. On August 13, a major update was launched for the iOS version, alongside the release of the Android version, adding mole rats and deathclaws as new enemies. It also added a new feature where raiders would also steal caps, instead of only stealing resources as before, and a robot butler named "Mister Handy", only available through lunchboxes.