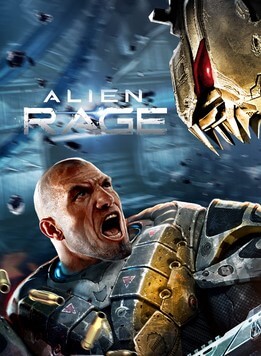 Alien Rage is a first-person shooter video game for Microsoft Windows, Xbox 360 (through Xbox Live Arcade), and PlayStation 3 (through PlayStation Network). Alien Rage was developed by Polish developer CI Games, then known as City Interactive, using Unreal Engine 3. The game has single-player and competitive multiplayer modes. In its single player campaign, players are put in control of an elite soldier named Jack. Jack is sent to destroy a mining facility and the aliens within it after the aliens turned against and killed the humans that they had shared the facility with.

Alien Rage is a first-person shooter, in which players fight through several linear levels, killing a variety of aliens. At the end of every few levels, players fight a larger alien in a boss fight. Players score points by killing a large number of aliens in a short period of time, or by killing them in special ways, such as by using explosions or shooting them in the head. These points can be used to upgrade the player character, for example by boosting his resistance to damage or by increasing the amount of ammunition that he is able to carry. Players are able to carry two weapons at a time, and also have a pistol with unlimited ammunition. The player character can use both human- and alien-manufactured weapons in the game, and alien weapons use a cool-down period instead of having to reload. Weapons in the game include assault rifles, sniper rifles, shotguns, rocket launchers, and miniguns. The game is intentionally difficult; its easiest difficulty level is called "challenging", and the next easiest difficulty level is called "hard".

The game also offers competitive multiplayer. There are two modes – deathmatch and team deathmatch – and a small number of maps. Cooperative gameplay, which was mentioned in the game's initial announcement, did not make it into the final game.

Alien Rage takes place on an asteroid which humans and an alien species known as Vorus were jointly mining for Promethium, a highly efficient source of energy. After the Vorus turn on the humans and wipe the miners out, Jack, the player character, is sent to the mining facility to kill the aliens and destroy the facility.

Alien Rage received average to poor reviews upon release. At Metacritic, a video game review aggregator, the Windows version of the game received an average score of 52 out of 100, based on 27 reviews, while the Xbox 360 version revived a score of 46, based on 10 reviews.B

The game was heavily criticized for its lack of originality. Daniel Shannon of GameSpot remarked that "If you have played a first-person shooter made in the last 10 years, then you have already experienced most of what Alien Rage has to offer.", and continued that "You've seen these weapons before, and you've shot these enemies before". Reviewers especially took issue with the lack of creativity in level design, which Destructoid's Jim Sterling called "tedious corridors full of identical, monotonous, brainless combat encounters". Hardcore Gamer's Nikola Suprak commented that several of the levels he played through were visually indistinct from one another, before saying that "level after level of redundant action and repetitive encounters ultimately drag the game down". Critics also noted that the game had a number of technical issues. Sterling ran into two situations where glitches would not allow him to progress without restarting the level, while Sam Turner of The Digital Fix experienced dramatic drops in frame rate during gameplay, and crashed to desktop several times.

The game's multiplayer experience was received better than its single player campaign. Writing for Gaming Nexus, Jeff Kintner said that the "multiplayer is fun, if a bit repetitive". While Kintner expressed a desire for additional, objective-based, types of multiplayer, he praised the team deathmatch mode's intensity. GameSpot's Daniel Shannon also commented on the limited number of multiplayer options, but went on to say that "For what it's worth, the action is fast-paced, and the maps are well designed for a balanced multiplayer experience."