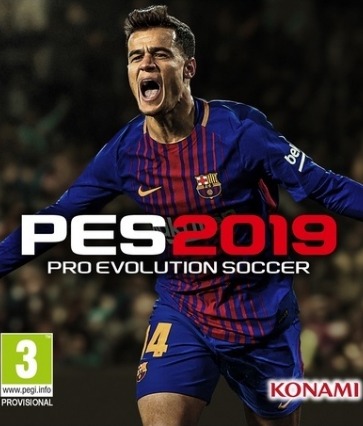 Pro Evolution Soccer 2019 (abbreviated as PES 2019) is a football simulation video game developed by PES Productions and published by Konami for Microsoft Windows, PlayStation 4, and Xbox One. The game was the 18th installment in the PES series and was released on 28 August 2018, in North America and on 30 August 2018, in Japan, Europe, and Australia. FC Barcelona winger Philippe Coutinho appears on the front cover of the standard edition, whereas David Beckham appears on the front cover of the legend edition. Scottish clubs Celtic and Rangers have been brought to the game along with their stadiums, bringing the world-famous Old Firm derby to the gaming world in detail. This is the final PES installment in the franchise, following the decision to rebrand it eFootball Pro Evolution Soccer, starting with 2020's edition.

For this year's edition, Konami had promised to increase the number of licenses, which included more fully licensed leagues and stadiums and a variety of new legends to play with. Until then, the official championships announced directly by Konami were 12 leagues which include the Ligue 1 and Ligue 2, Danish Superligaen, the Portuguese Primeira Liga, the Belgian Jupiler Pro League, the Swiss Raiffeisen Super League, the Scottish Premiership, the Dutch Eredivisie, the Argentine Primera División. However, Konami announced that it did not renew its deal with UEFA for the Champions League, Europa League, and the UEFA Super Cup which they had for 10 years; the licence is being used in EA Sports FIFA 19. PES 2019 was succeeded by eFootball Pro Evolution Soccer 2020.

PES 2019 is a sports game that simulates football. PES 2019's Magic Moments feature is set to be the forefront of its gameplay. Konami announced that the International Champions Cup before the season begins has been added, and they also announced an improved negotiation system and budget management. They also added re-sell and clean sheet options to introduce strategy in club management. 11 new skill traits have been introduced, including edge turn, no look pass, control loop, dipping shot, and rising shot. They have also announced that player individuality has been expanded, where skills and strengths are more prominent in impact and motion during gameplay. Full body touch introduced last year has also been enhanced.

Other features include a number of graphical boosts and 4K HDR support across all compatible platforms. Enlighten software has been used to rework lighting, both natural and stadium based. Stands and pitches closely mirror their real life counterparts depending on the time of day.

Pro Evolution Soccer 2019 has received positive reviews. On Metacritic, the PlayStation 4 version has a metascore of 79 based on 53 reviews, indicating "generally favorable reviews". The game generally received praise for its gameplay, but criticism for its lack of licenses. GameSpot rated it 9 out of 10, stating that it made "brilliant strides on the pitch, building on what was already an incredibly satisfying game of football to produce one of the greatest playing football games of all time." IGN rated it 8.2 out of 10, stating that its "focus on individual brilliance brings players to life and gives the game an extra dimension of authenticity."