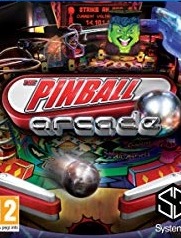 The Pinball Arcade is a pinball video game developed by FarSight Studios. The game is a simulated collection of real pinball tables licensed by Gottlieb, Alvin G. and Company, and Stern Pinball, a company which also owns the rights of machines from Data East and Sega Pinball. Williams and Bally games are no longer available since June 30, 2018, as FarSight had lost the license to WMS properties, which has since passed to Zen Studios.

The game is available for download on a number of devices through their respective online stores, including Android (along with derivatives such as Kindle Fire and Ouya), iOS, Windows (through Steam), macOS (through the Mac App Store and Steam), PlayStation Vita, PlayStation 3, PlayStation 4 (through PlayStation Store), Xbox 360, Xbox One, Wii U in North America only, and Nintendo Switch.

Tables are available for free limited demo play on Android, iOS, and other platforms. Every month, along with the release of downloadable content (DLC), four select tables on mobile versions are free with no Pro Menu features. PC versions are limited to one free table.

A spinoff called Stern Pinball Arcade was released in June 2016 for Gear VR, PlayStation 4, PC, and other platforms. This is a direct collaboration with Stern Pinball, to expand on re-releasing the company's more recent releases.

FarSight Studios took part in the Steam Greenlight program to distribute The Pinball Arcade for Windows-based personal computers. The game was successfully Greenlit on April 18, 2013. From August until October 2013, the PC version of The Pinball Arcade was in beta-testing. The Windows version of Pinball Arcade was released on November 4, 2013, along with the first 19 table packs. A Macintosh version of the Steam release was released on December 16, 2013. Although tables have to be purchased for each platform separately FarSight buyers of the Steam version are able to play their tables on OS X and Windows.

The option to buy a season pass for an entire season, including unreleased tables in advance, was cancelled in February 2014 on the Mac App Store due to violation of Apple's policies that do not allow sales of unreleased software.

On April 1, 2014, FarSight released a patch that included stereoscopic 3D support for PlayStation 3.

Besides recreations of existing pinball machines, FarSight is also producing its own original-design tables. A Ghostbusters-themed table was released in late October 2014 as a stand-alone application for Android and iOS using the same layout as Haunted House.

The development of a version for the Wii console was considered but scrapped due to technical limitations.

On December 9, 2016, FarSight Studios announced Arcooda Pinball Arcade in cooperation with Arcooda, an Australian manufacturer of arcade and gaming machines. The game is an enhanced version of The Pinball Arcade running in a cabinet.

Al's Garage Band Goes On a World Tour, released on January 27, 2017, was the first table by Alvin G. and Company, the fifth distinct manufacturer to appear in the game.

Bally and Williams tables are no longer available for purchase following their non-renewal by the rights holders. The tables may still be played by those who already own them, but they can no longer be purchased as of June 30, 2018. Zen Studios currently holds the rights to develop digital versions of such licensed tables.

The Pinball Arcade was well received by critics. It averages 84.83% for Xbox 360, 81.67% for PS3, and 80.00% for PlayStation Vita at GameRankings and 82/100 for Xbox360, 79/100 for PlayStation Vita, and 82/100 for iOS at Metacritic. IGN gave 9/10 for the PC and PS4 version of The Pinball Arcade and concluded: "For pinball fanatics or just those curious about gaming’s relatively low-tech past, Pinball Arcade is an excellent starting point for re-experiencing the golden days of quarter-munchers."

The Pinball Arcade won best mobile game of 2012 in X-Play's Best of 2012 Awards and was also nominated for best remake/retro release in 2012. The PC World website listed The Pinball Arcade at number 100 on their top 100 best products of 2012.

A BBC News article described virtual pinball games such as The Pinball Arcade as a way to preserve pinball culture and bring it to new audiences.