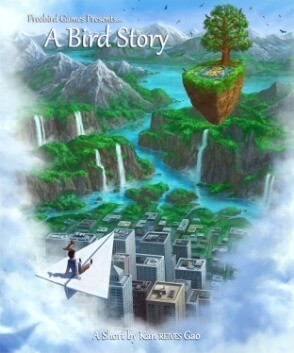 A Bird Story is an adventure role-playing video game developed and published by Freebird Games. It was released in November 2014 for Microsoft Windows, OS X, and Linux as a minisode connecting the previous game by Freebird Games, To the Moon, with its sequel, Finding Paradise. It received mixed reviews from critics, whose main complaints were its dullness and slow gameplay.

A Bird Story is a short video-game in which the player controls an imaginative young boy who is ignored by the majority of the other characters and throughout the whole game; all characters except the boy and a few others have ghost-like bodies. When the boy finds an injured bird, he becomes happier and begins to notice more people, and his introversion lowers. The map is as though the game is a recollection of memories, instead of being in real time. The player could be in a park which leads into a hallway. In a Kotaku review, the lack of dialogue was compared to the expression "show, don't tell".

A Bird Story was developed by Freebird Games using the RPG Maker XP engine. It was ported to Linux and MacOS with the open source RPG Maker XP game engine recreation MKXP.

A Bird Story received mixed reviews, with an overall 66/100 Metacritic rating based on 18 critic reviews. Many reviewers have compared this game to To the Moon, another game by Freebird Games. Andrew Barker, in a review for RPGFan said the game is an enjoyable experience but isn't for everyone; the game's pace moves slowly and even though it's an hour long, the memory of the game will linger. The lack of proper gameplay was criticised by many reviewers; in a Rock, Paper, Shotgun article, John Walker criticised the "incredibly slow" movement mechanics, in a Kotaku review by Cassidee Moser, the only listed con was the linearity of the gameplay and in a PC Gamer review by Tyler Wilde the game was described as dull and slow but sentimental nonetheless. Roger Hargreaves for Metro said that it was a massive disappointment after the success of To the Moon. The predictability of the storyline was also criticised by Hargreaves, along with other reviewers such as Christian Donlan from Eurogamer.