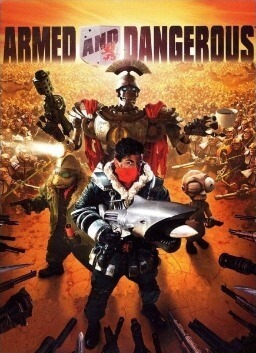 Armed and Dangerous is a 2003 video game created by Planet Moon Studios and released by LucasArts. It is a third-person action-adventure shooter which parodies both other games and several other media such as The Lord of the Rings, Star Wars, and Monty Python and the Holy Grail, using humorous in-game dialogue and cutscenes. The game features known actors and voice actors such as Brian George as main hero Roman, Jeff Bennett, John Mariano and Pat Fraley as his sidekicks Jonesy, Rexus and Q (respectively) and Tony Jay as villain King Forge.

Armed and Dangerous is a third-person shooter action game, the camera hovering behind Roman, the player character, at all times. The game is played mostly on foot, with most levels incorporating usable gun emplacements, although there are some base defense levels where the player is inside a movable gun turret mounted on rails on top of a defensive wall; these levels are played in first-person.

Playable weaponry and equipment in Armed and Dangerous is a mix of shooter staples, including bolt-action and sniper rifles, submachine guns and rocket launchers, but also more unusual fare like the 'Land Shark Gun', which fires into the ground a rapidly maturing infant Land Shark, a creature that 'swims' through the earth, seeking out and devouring enemies. Other unusual devices include a miniature black hole, a gas grenade that turns enemies against each other, and a device that temporarily reverses gravity, causing enemies to 'fall' into the sky and literally turning the world upside-down before the device shuts down, returning gravity to normal and returning affected enemies to earth, killing them by the fall. Apart from weaponry, some of the later levels equip the player with a jet pack, allowing flight over moderate distances.

The game received "generally favorable reviews" on both platforms according to video game review aggregator Metacritic.