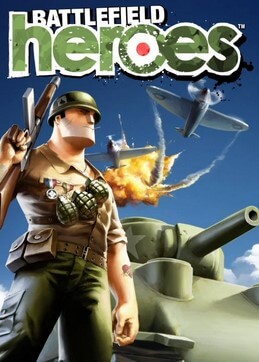 Battlefield Heroes was a 2009 third-person shooter video game developed by EA DICE initially and further developed by Easy Studios, published by Electronic Arts for Microsoft Windows. Battlefield Heroes was less demanding on computer specifications than the previous games of the series to increase the audience base. In addition, the game matched players of similar levels together for fairer play.

Heroes was the first Battlefield game to be made under Electronic Arts' new "Play 4 Free" model, which saw the game released for free with revenue generated from advertising and micropayments. Advertisements appeared on the website and the 'front-end' of the game although none appeared while playing, while micropayments were able to be made for additional items to customize the appearance of players' avatars or to buy stronger weapons. Furthermore, purchasable Play 4 Free Funds (formerly known as Battlefunds) were usable for redeeming rate boosts to experience points along with other items.

Battlefield Heroes featured a modified conquest mode providing each team 50 lives and eventually one flag at the start of the round. Killing enemies and holding more flags than the opposing army would progressively reduce their number of lives. The game also featured matchmaking, to keep players of the same level together. Developers of the game had talked about levels going as high as 40 or 50, although the level cap never rose higher than 30. The two armies were called the National Army (possessing a red base color flag) and the Royal Army (possessing a blue base color flag). The game was third-person only, but senior producer Ben Cousins had stated if first-person is really wanted, it may have been added in at a later date. Spawn times were 5 seconds (compared to the 15 seconds of previous Battlefield games, except for the map "Midnight Mayhem."), allowing for less waiting and more action. Players did not pick spawn points since the game had an "Intelligent Spawn System" putting players closest to the nearest battle. Sometimes the player would be parachuted behind enemy lines. There was also a new mode called "Conquest V2." The goal of this mode was to take hold of a rocket for 5 minutes.

Like previous Battlefield games Battlefield Heroes had a class system, which had been reduced to three basic classes: the Soldier (a mid speed, mid health mid ranged weaponed medic), Gunner (a heavy weaponed, high health slow class), and Commando (a low health, speedy, snipe and knife specialist). All three classes had their own advantages and disadvantages.

There were several vehicles in the game, all patterned after real vehicles of the Second World War. Included were two "light tanks", in the style of the M4 Sherman and the Panzer III/IV. Wheeled Vehicles were also in game, and were patterned after the Kubelwagen and the Willys Jeep. Finally there were four aircraft, two of which were also made to look like the Messerschmitt Bf 109 and the Supermarine Spitfire, and the others were types of helicopters. All vehicles had passenger slots, the tank with passenger space in the turret, the wheeled vehicles held three passengers, the aircraft with a slot on each wing, and the helicopters with slots on each side. All passengers, except the driver, could fire their normal hand-held weapons, and use abilities, from inside the vehicle.

Players could be awarded achievements by a mission system which allowed missions to be completed in order to get valor points.

Players could also buy a currency called "Play for Free Funds" from the main website to buy in-game items such as different guns, ammo, emotes, experience and Valor point boosts, healing bandages, vehicle-repairing wrenches, "boosts" that increase the amount of valor points obtained, or weapons that last either for a period of time, or forever.