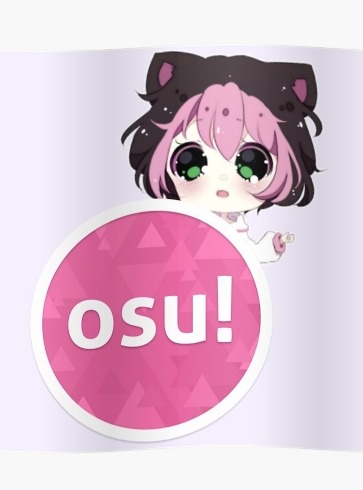 osu! is a free and open-source rhythm game primarily developed, published and created by Dean "peppy" Herbert. Originally released for Microsoft Windows on September 16, 2007, the game has also been ported to macOS. Its gameplay is based on titles including Osu! Tatakae! Ouendan, Elite Beat Agents, Taiko no Tatsujin, Beatmania IIDX, O2Jam, and DJMax. The game has an active e-sports community, and is also sometimes recommended by professional players of other games to practice or warm-up.

There are four official game modes: "osu!standard" (often just called "osu!"), "osu!taiko", "osu!catch" (formerly "osu!ctb"), and "osu!mania". These are played with beatmaps. Beatmaps consist of three main items – hit circles, sliders, and spinners. These objects are arranged in different positions on the screen and in different points of time. The beatmap is then played with accompanying music, simulating a sense of rhythm as the player interacts with the objects to the beat of the music. The game can be played using various peripherals, such as a computer mouse, graphics tablet, keyboard, or a touchscreen device.

osu!taiko is a game mode which consists of clicking notes to the beat on a drum-like interface, inspired by the Taiko no Tatsujin series.

osu!catch, formerly known as osu!ctb (catch the beat), is a game mode which consists of catching fruit to the beat by controlling a mini-character holding a plate.

osu!mania is a game mode which consists of a piano-like style of clicking notes to the beat, similar to the Beatmania IIDX series. The number of keys ranges from 1 to 9, with 4 keys and 7 keys being more popular among players.

"Ranked & Approved" – type of commmunity made beatmaps that are approved to be playable by Beatmap Nominators, or BNs. They give performance points (pp) that allow players to advance in the global player leaderboard.

"Qualified" – type of beatmaps which are on their way of becoming ranked. Beatmaps will remain in qualified for 1 week, afterwhich they will be ranked. Beatmaps in "Qualified" will be Disqualified and have the beatmap status reset to Pending if any issues that do not pertain to osu!'s ranking criteria are found. They do not award performance points.

"Loved" – type of beatmaps that have received a significant reception from the community and were approved to be playable. They only feature a beatmap leaderboard. This leaderboard can be reset by the beatmap author.

"Pending" and "WIP" – type of beatmaps which are either not fully done or waiting to be ranked. They do not have a leaderboard.

"Graveyard" – type of beatmaps which have not received an update in over 30 days. Just like pending beatmaps, they do not have a leaderboard.

The game offers a subscription-based service, osu!supporter, that allows players to download beatmaps directly from inside the game, a heart icon beside the username on the official osu! website, additional pending beatmap slots, faster download speeds, access to multiplayer on cutting edge build, friend and country-specific leaderboards, one free username change, more customization in-game, and more customization on one's user page. osu!supporter does not affect ranking at all and all funds are directed to maintaining osu!.

Jeuxvideo.com reviewed osu! favorably with 18/20 points in 2015. In 2010, MMOGames.com reviewer Daniel Ball said that while the game was very similar to Elite Beat Agents, it was differentiated by its community's large library of high-quality community made content and customization.

osu! has been used and recommended by e-sport players such as Ninja and EFFECT, as a way to warm-up and practice their aim.