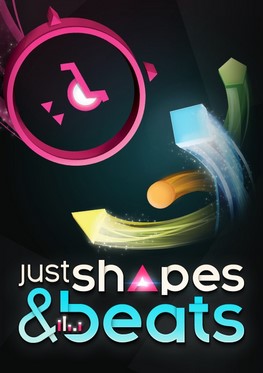 Just Shapes & Beats is an action rhythm video game developed and published by Canadian indie team Berzerk Studio. It was released on May 31, 2018 for Windows and Nintendo Switch, February 24, 2019 for macOS and Linux, May 10, 2019 for PlayStation 4 in the US, and May 30, 2019 for PlayStation 4 in Europe, Russia and Australia. In the game, players move to the beat of background music as a colorful shape that survives by dodging pink shapes.

Up to four players control one small shape, surviving attacks simply by dodging against a variety of attacks, such as huge beams, bouncing hills, snake-like spirals, and pulsating shapes. These attacks appear, move, and attack in rhythm to the music, with difficulty increasing the further players progress.

Getting struck by one of these attacks causes a player to lose part of their shape. If the shape breaks entirely, the game rewinds to the previous checkpoint. Three breaks results in a Game Over screen that states "It's Over". Tap Space, A, X, etc. multiple times and your P1 shape, a cyan square, fixes itself with a screen that NOW says "It's NOT over". The rhythm visually manifests on-screen as all manner of objects, of different patterns and sizes, that must be dodged until the track ends. Hardcore mode was added in 2019 which updates all levels with a second version.

The first demo of the game was revealed at PAX 2016 and was supposed to be released that summer. During the event, release date was delayed from late 2016 to early 2017. The game was eventually delayed again, with a launch date of summer 2018. On March 20, 2018 it was announced that the game would also receive a release on the Nintendo Switch.