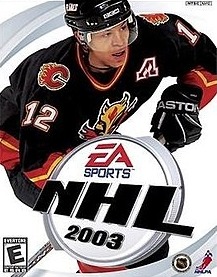 NHL 2003 is the 11th edition of the popular EA Sports NHL series, a hockey video game, released in 2002 as the successor to NHL 2002. Jarome Iginla appears as the cover athlete and spokesperson of the game. Iginla appears in the Behind The Scenes video to show the player how the game was made. It was the first installment of the NHL series to be released on GameCube.

NHL 2003 introduced a new feature: the GameBreaker. It is activated once a player performs enough "dekes" and it is used to help change the momentum of the game, such as scoring a big goal, delivering a big hit or winning a big fight.

The commentary in NHL 2003 is voiced by Jim Hughson and Don Taylor. Hughson has been the NHL series announcer since NHL '97, while Taylor first appeared in the previous year's version.

The game received "generally favorable reviews" on all platforms according to the review aggregation website Metacritic.