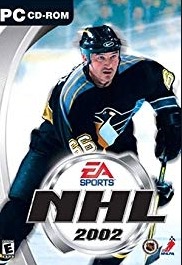 NHL 2002 is a video game released by EA Sports in 2001. It is the predecessor to NHL 2003. The game's cover man is Pittsburgh Penguins superstar and owner Mario Lemieux, who had just made a comeback after being retired for three and a half years. It was the first installment of the NHL series to be released on Xbox.

After September 11, 2001, a patch was created that changed the image shown on the loading screen before New York Rangers games. Originally, it had been the World Trade Center. It was changed to the Statue of Liberty. (New York Islanders games simply showed the arena.)

The PlayStation 2 version received "universal acclaim", while the rest of the console versions received "generally favorable reviews", according to the review aggregation website Metacritic.

The editors of Computer Games Magazine nominated NHL 2002 as the best sports game of 2001, but ultimately gave the award to High Heat Baseball 2002.