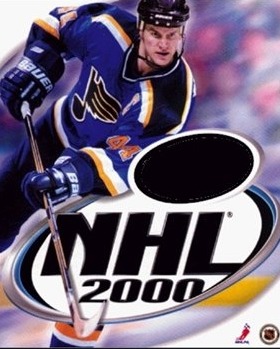 NHL 2000 is an ice hockey video game developed by Electronic Arts Canada. It was released in 1999 and was the successor to NHL 99. The game did not boast great improvements to the game from NHL 99, nor did NHL 2001 feature any idea the two previous versions didn't until NHL 2002.

The tagline of this game was, "Only the physical will survive." The main cover man was Chris Pronger, then of the St. Louis Blues. The cover man for versions sold in the majority of Europe was Markus Näslund of the Vancouver Canucks, while Richard Šmehlík of the Buffalo Sabres was on the cover of the game in the Czech Republic.

A season mode (later developed into a Franchise mode) with a retirement feature, drafting, and player trades were added to the series in NHL 99, and similar gameplay was used in this version, as well. NHL 2000 kept features from NHL 99; for example, created players can use any photo for their face, which is textured onto the head.

Another mode in NHL 2000 is the Tournament mode, in which the user chooses 16 countries (only 18 countries were available in the game) to play a round robin. After the round robin, eight teams are eliminated and then the remaining eight have a "playoff," but instead of it being out of seven games it was single-elimination. Eventually, a winner is crowned gold in the championship match. There is also a third place match for the losers of the semi-finals.

The game has a total of 28 NHL teams, including the new expansion Atlanta Thrashers, which was the only team in the game that didn't exist in the 1998-99 season. Online leagues of the game also became more organized.

Daryl Reaugh left the series as colour commentator in this game and was replaced by Bill Clement. Jim Hughson remained as play-by-play announcer throughout the series.

Jim Preston reviewed the PlayStation version of the game for Next Generation, rating it five stars out of five, and stated that "EA Sports once again proves it does hockey better than anyone else on the planet."

The editors of PC Gamer US nominated NHL 2000 for their 1999 "Best Sports Game" award, which ultimately went to High Heat Baseball 2000. They wrote of NHL 2000, "Arcade-style hockey just doesn't get any better."