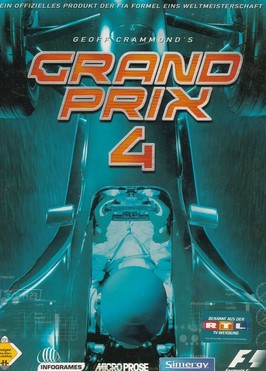 
Grand Prix 4, commonly known as GP4, was released for the PC on June 21, 2002, is currently the last Formula One racing simulator released by the developer Geoff Crammond and the MicroProse label. Based on the 2001 Formula One season, GP4 essentially serves as a graphical and seasonal update of Grand Prix 3 which had been released in 2000. The game retained the series' legendary physics engine. However it entered the market at a far less hospitable time than its three predecessors, and the game faced stiff competition from an alternative Formula One simulation from studios such as ISI.

After the criticism received by Grand Prix 3 for not advancing the series Grand Prix 4 featured a heavily revised graphics engine and updated physics including wet weather driving that even today is considered some of the best to ever feature in a motorsport simulation. Despite this, the game still showed Crammond's oft-commented dated approach to game design.

Although the game could be considered a relatively modest commercial success the chances of a further entry to the series could be considered slim to none because MicroProse's parent company Infogrames dissolved the developer shortly after the game's release. Also, the Sony Computer Entertainment brand's exclusive licensing deal for Formula One games rules out an update with official stats. An Xbox port of the title had been planned for release in late 2002 before being cancelled in October of that year.

The game won the award in the Sports category at the British Academy of Film and Television Arts Awards in 2002. It was also nominated for Computer Gaming World's 2002 "Sports Game of the Year" award, which ultimately went to Madden NFL 2003. The editors called Grand Prix 4 "one of the better racing games in years past".

All games from the serie "Grand Prix"