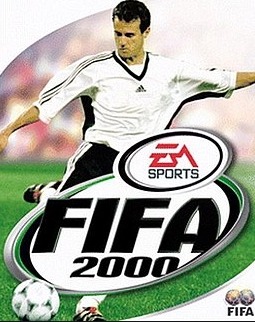 FIFA 2000 (titled FIFA 2000: Major League Soccer in North America, and FIFA 2000: Europa League Soccer in Japan) is an association football video game developed by EA Canada and published by Electronic Arts. It was the seventh game in the main FIFA series. The game was released for Microsoft Windows and PlayStation. A version was also released for the Game Boy Color, developed by Tiertex Design Studios and published by THQ.

Among the innovations for this edition of the series was the ability to play over consecutive seasons, giving the possibility of competing for promotion or relegation and qualification for European Cup competition. The US Major League Soccer was officially licensed for the first time, and was used as a subtitle for the North American release.

Commentary in the UK English release is provided by BBC television commentators John Motson, Mark Lawrenson and Chris Waddle. The commentary was recorded in a London studio, however for the first time in the series Motson visited the games developers in Vancouver, Canada to provide insights into the intracaices of the real-life game. The US English release features commentary from Phil Schoen and Julie Foudy. Localised commentary exists for the German, Spanish, French, Italian, Hebrew, Japanese, Greek and Brazilian Portuguese releases.

The game's theme music was Robbie Williams' "It's Only Us". As part of the agreement to licence the track EA Sports included Port Vale, the club Robbie Williams supports, in the game, despite only being in the third tier of the English football league system, which wasn't included as part of this game.

The game was met with positive reception, with the exception of the Game Boy Color version, which currently has a score of 47% on GameRankings; the site also gave the PlayStation version 87%, and the PC version 85%.

PlayStation Max awarded a gold rating to the game, praising the game's looks, sound and longevity, although they did criticise the ease with which it was possible to score goals. Official UK PlayStation Magazine went further with their criticism of the gameplay, believing the passing to be "too precise" and it being unrealistically easy to beat defenders. They did praise the level of detail in the game's graphics and the commentary and awarded the game a score of 7/10.