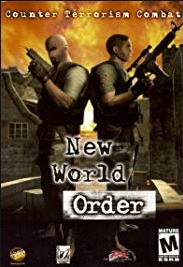 New World Order is an online team-based tactical first-person shooter video game, similar to Counter-Strike. The game was developed by Termite Games, a Swedish game studio, and is powered by the DVA graphics engine.

The game received "generally unfavorable reviews" according to the review aggregation website Metacritic. GameSpot stated that it "fails in every imaginable way", and Eurogamer described it as "horrendously bad" and "a total farce".