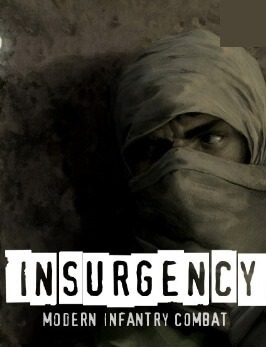 Insurgency: Modern Infantry Combat is a total conversion mod for Valve Corporation's Source engine released in 2007. Insurgency is a multiplayer, tactical first-person shooter. The game has a focus on realism through the use of a steep damage model. The game is primarily set in Iraq, however some maps are set in Afghanistan.

A standalone sequel, also titled Insurgency, was released in 2014.

The game is primarily a team-based, multiplayer online shooter focused on tactical, objective-based gameplay. The player can join one of two teams, the American security forces, or their adversaries, the Insurgents. Teams are structured around two squads, for a total of 16 maximum players per team. Within this team structure are limited player classes, such as the Rifleman, Support Gunner, Engineer, or Marksman.

The game has a pseudo-realistic portrayal of the weaponry used. There is no on-screen crosshair and the players must use the iron sights of the game's weapon model to accurately aim the weapon. Shooting "from the hip" is still possible; however, the free-aim system makes this difficult. Weapons are also more deadly than in most first-person shooter titles, with most rifles capable of taking out players with one or two shots to the torso. According to their class, players can also use fragmentation grenades, smoke grenades, and RPGs.

Maps are generally focused on urban warfare, even though there are suburban and outdoor settings.

The development of Operation: Counter-Insurgency (OPCOIN) started in 2002, when Andrew Spearin decided to create a realistic modern infantry squad-based multiplayer first-person shooter based on his experiences in the Canadian Army.

Key turning points in development came when Jeremy Blum, founder of the Red Orchestra mod, joined the team with other former Red Orchestra developers. Shortly after the project was officially renamed from Operation: Counter-Insurgency to simply Insurgency and full production started and continued until the first public release two years later in July 2007.