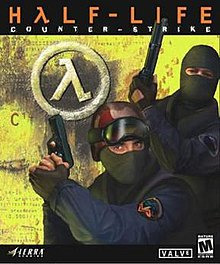 Counter-Strike (also known as Half-Life: Counter-Strike) is a first-person shooter video game developed by Valve Corporation. It was initially developed and released as a Half-Life modification by Minh "Gooseman" Le and Jess Cliffe in 1999, before Le and Cliffe were hired and the game's intellectual property acquired. Counter-Strike was released by Valve on the Microsoft Windows platform in 2000. The game spawned a franchise, and is the first installment in the Counter-Strike series. Several remakes and ports of Counter-Strike have been released on the Xbox console (by Microsoft Game Studios), as well as OS X and Linux. It is commonly referred to as Counter-Strike 1.6 to distinguish it from other titles of the series, 1.6 being the final major software update the game received.

Set in various locations around the globe, players assume the roles of members of combating teams of the governmental counter-terrorist forces and various terrorist militants opposing them. During each round of gameplay, the two teams are tasked with defeating the other by the means of either achieving the map's objectives, or else eliminating all of the enemy combatants. Each player may customize their arsenal of weapons and accessories at the beginning of every match, with currency being earned after the end of each round.

Counter-Strike is a first-person shooter game in which players join either the terrorist team, the counter-terrorist team, or become spectators. Each team attempts to complete their mission objective and/or eliminate the opposing team. Each round starts with the two teams spawning simultaneously. All players have only one life by default and start with a pistol as well as a knife.

The objectives vary depending on the type of map, and these are the most usual ones:

Hostage rescue: The counter-terrorists must rescue a group of hostages held by the terrorists to win. The terrorists win if the time runs out with no conclusion.

Assassination: One of the counter-terrorists is chosen to act as a VIP and the team must escort this player to a designated spot on the map to win the game. The terrorists win if the VIP is killed or if the time runs out with no conclusion.

A player can choose to play as one of eight different default character models (four for each side, although Counter-Strike: Condition Zero added two extra models, bringing the total to ten). Players are generally given a few seconds before the round begins (known as "freeze time") to prepare and buy equipment, during which they cannot attack or move. They can return to the buy area within a set amount of time to buy more equipment (some custom maps included neutral "buy zones" that could be used by both teams). Once the round has ended, surviving players retain their equipment for use in the next round; players who were killed begin the next round with the basic default starting equipment.

Standard monetary bonuses are awarded for winning a round, losing a round, killing an enemy, being the first to instruct a hostage to follow, rescuing a hostage, planting the bomb (Terrorist) or defusing the bomb (Counter-Terrorist).

The scoreboard displays team scores in addition to statistics for each player: name, kills, deaths, and ping (in milliseconds). The scoreboard also indicates whether a player is dead, carrying the bomb (on bomb maps), or is the VIP (on assassination maps), although information on players on the opposing team is hidden from a player until his/her death, as this information can be important.

Killed players become "spectators" for the duration of the round; they cannot change their names before their next spawn, text chat cannot be sent to or received from live players, and voice chat can only be received from live players and not sent to them. Spectators are generally able to watch the rest of the round from multiple selectable views, although some servers disable some of these views to prevent dead players from relaying information about living players to their teammates through alternative media (most notably voice in the case of Internet cafes and Voice over IP programs such as TeamSpeak or Ventrilo). This form of cheating is known as "ghosting."

Counter-Strike began as a mod atop Half-Life' engine GoldSrc. Minh Le, the mod's co-creator, had started his last semester at university, and wanted to do something in game development to help give him better job prospects. Throughout university, Le had worked on mods with the Quake engine, and on looking for this latest project, wanted to try something new and opted for GoldSrc. At the onset, Valve had not yet released the software development kit (SDK) for GoldSrc but affirmed it would be available in a few months, allowing Le to work on the character models in the interim. Once the GoldSrc SDK was available, Le estimated it took him about a month and a half to complete the programming and integrate his models for "Beta One" of Counter-Strike. To assist, Le had help from Jess Cliffe who managed the game's website and community, and had contacts within level map making community to help build some of the levels for the game. The theme of countering terrorists was inspired by Le's own interest in guns and the military, and from games like Rainbow Six and Spec Ops.

Le and Cliffe continued to release Betas on a frequent basis for feedback. The initial few Betas, released starting in June 1999, had limited audiences but by the fifth one, interest in the project dramatically grew. The interest in the game drew numerous players to the website, which helped Le and Cliffe to make revenue from ads hosted on the site. Around 2000 at the tile of Beta 5's release, the two were approached by Valve, offering to buy the Counter-Strike intellectual property and offering both jobs to continue its development. Both accepted the offer, and by September 2000, Valve released the first non-beta version of the game. While Cliffe stayed with Valve, Le did some additional work towards a Counter-Strike 2.0 based on Valve's upcoming Source engine, but left to start his own studio after Valve opted to shelf the sequel.