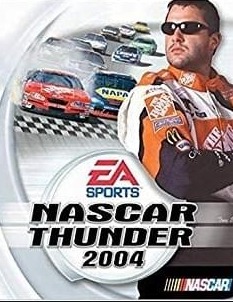 NASCAR Thunder 2004 is a racing simulator by EA Sports, released in 2003 and available in separate versions for PlayStation, PlayStation 2, Xbox, and PC. It features the 2002 champion Tony Stewart on the cover with a scowling look to represent the new Grudges and Alliances feature. It was the only game as of 2002 to feature the previous Winston Cup Champion on the cover. The game had the most extensive soundtrack of the series up from four songs from the previous game. The game also has a career mode, season mode, Lightning Challenge mode, SpeedZone, as well as a tutorial mode featuring Richard Petty. The game is an EA Sports Bio game, and is compatible with other EA Sports Bio games like Madden NFL 2004 and NCAA Football 2004. A Nintendo GameCube port was planned but was cancelled for unknown reasons.

Career mode is one of the returning modes in the game, in which the player takes control of a custom driver, and races to get sponsors, equipment for his garage, and respect from other drivers.

Season mode allows players to take control of either a custom driver, or an existing driver for a season or more, with custom rules and schedules.

SpeedZone is a mode in which players can hone their skills in passing, blocking, drafting, as well as time trials.

Lightning Challenge is a mode in which the player takes control of a driver and race in a situation that occurred in the 2002 Winston Cup and 2003 Winston Cup seasons to that particular driver, which also comes with a video with Michael Waltrip as the reporter, and beating these challenges unlocks the player new Thunder Plates, which unlocks new tracks, fantasy drivers, Busch Series drivers from the 2003 season, as well as legendary drivers.

Another new game mode is Online mode, where players can race online if they have an Internet connection and adapter. Microphone support also was available, this feature is not available on Xbox and PS1 however.

There is also a tutorial mode (which is called Thunder License) featuring NASCAR legend Richard Petty, in which the player has to follow a driver of his/her choice along a racing line around the track, with various voice commentary by Petty. The racing line can also be toggled in Race Now mode.

The game received positive reviews from critics, with IGN giving the PS2 version an 8.8/10, praising the sounds, "QuickSave", and the microphone support. The main issue that IGN cited was that the driving model is somewhat unrealistic. IGN gave the PC version an 8.5, with the issue being the spotter's incompetence. The Xbox review was also an 8.5, and praised the framerate. GameSpot called the game the Tony Hawk or Madden of NASCAR, and gave the game an 8.8, with Metacritic giving it an 88. The more critical review came from GameZone, giving the game an 8.4.

The game received many top awards, the most notable was received at the 2003 Video Game Awards, where NASCAR Thunder 2004 won the award for 2003's best racing game. It is currently the only NASCAR game to win an award at the VGAs.