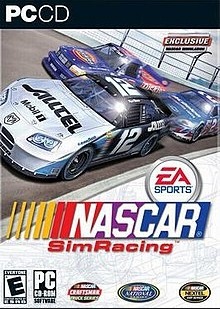 NASCAR SimRacing, abbreviated NSR, is a computer racing simulator developed by EA Tiburon and released on February 15, 2005, by EA Sports for Microsoft Windows. The game includes all of the 2004 NEXTEL Cup Series tracks except Pocono Raceway, which was also absent from NASCAR 2005: Chase for the Cup, due to failed negotiations with licensing.

The game features NASCAR's top 3 series, the NASCAR Cup Series, Busch Series, and Craftsman Truck Series. The game features a single-player career mode as well as multiplayer online gameplay. Despite being published by Electronic Arts and having the name "Sim" in the title, it bears no relationship to Maxis's The Sims franchise. The game also features many paint schemes used during the 2004 and 2005 Cup Series; however the original release featured the 2005 cars replaced with their 2004 counterparts. This game was the last NASCAR game to be released for the PC by EA; the next NASCAR game for PC would be NASCAR The Game: 2013 by Eutechnyx.

While a large number of real drivers are present in the Cup, Busch and Truck Series in NASCAR SimRacing, fantasy drivers are still present, sponsored by fictional or unused sponsors. A patch is available at installation to download the 2005 NEXTEL Cup cars as a separate mod. In October 2006 EA Sports shut down the GameSpy multiplayer servers.

Many of the tracks in the game were real tracks like Daytona International Speedway and Atlanta Motor Speedway, but there were three fictional tracks: Dodge Raceway Stadium, Levi Strauss Signature Speedway and Red Ball Raceway including the now-defunct Nazareth Speedway.