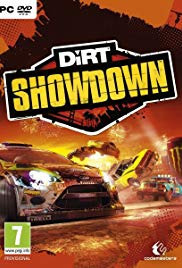 Dirt: Showdown (stylised as DiRT: Showdown) is a video game published and developed by Codemasters for Microsoft Windows, OS X, Xbox 360, PlayStation 3 and Linux. It was released on 25 May 2012 in Europe and on 12 June in North America. The OS X version was released on 4 September 2014 in North America. The game was released for Linux on 17 August 2015. It is part of the Colin McRae Rally game series. The game was also released on Xbox 360 for free as part of Microsoft's Games with Gold promotion from 1 January 2016 to 15 January 2016.

The player is entered in a series of "Tour" events, offering a range of races and tournaments to compete in. Winning these events gives the player prize money, which can be spent buying new cars or upgrading existing ones, and unlocks further races. Upon the successful completion of the series final, the next difficulty setting is unlocked, featuring faster opponents and longer races.

The announcement trailer was released on YouTube on 11 December 2011. The soundtrack in the trailer was "Earthquake" by Labrinth.

The official gameplay trailer was released on 26 January 2012 which featured the song "Mother of Girl" by Eighteen Nightmares at the Lux. This song is also the lead track in the game.

The game has received mixed reviews, gaining an average review score of 72% on Metacritic.

PC Gamer wrote: "Dirt: Showdown provides thrills while it lasts, but afterwards you're left wanting the deeper experience of its parents".