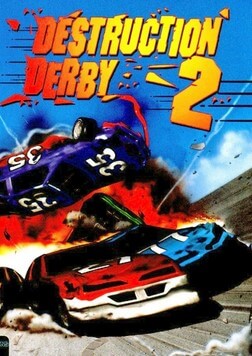 
Destruction Derby 2 is a vehicular combat racing video game developed by Reflections Interactive and published in 1996 by Psygnosis for Microsoft Windows and PlayStation. The sequel to Destruction Derby, players race with the goal of earning points by damaging opponent cars. Standard races and matches based in arenas with the goal of remaining the last player driving are also available. The game is an overhaul of the original and features ideas that did not make it into the first game including tracks that feature obstacles and improved realism. The car mechanics were also redesigned. Development was also focused on Americanisation: the game style shifted away from the British banger racing of the original, and the cars and music were changed to fit a NASCAR theme. The game features Paul Page as commentator, and the soundtrack was created by thrash metal bands Jug and Tuscan. The game was positively received, with reviewers praising the large tracks and car physics, though the PC version was criticised for its difficulty.

Destruction Derby 2 is the sequel to Destruction Derby. Like the original, players race on one of seven circuits in a range of modes. The modes are Wrecking Racing, in which the goal is to earn points by destroying or spinning the other competitors during the race; Stock Car, a typical race during which cars can still be damaged or destroyed; and Destruction Derby, based around the crash arenas instead of race tracks, in which the goal is to inflict as much damage as possible. A new feature called the pit stop was added to the race tracks, where cars can be repaired. Another major difference from the original game is track obstacles such as jumps and crossovers.

There are also four different game types: Championship, Race Practice, Time Trial, and Multi Player. In Championship, players compete in a league of seasons consisting of four races and, in Wrecking Racing, a Destruction Derby match. In Race Practice, players practise a race, while Time Trials consists of a race against the clock. Multi Player allows up to nine players to race individually. After all have finished, a league table showing their placings is displayed.

The original Destruction Derby was developed in seven months, resulting in a few design flaws and the cutting of several ideas that could not be implemented within that time frame. According to producer Martin Edmondson, Destruction Derby 2 is a rewrite of the original, with only the 2D collision algorithms remaining intact. The engine was rewritten to handle the larger tracks incorporating obstacles such as hills and jumps, while the car dynamics were also redesigned. The collision routines were extended so cars can handle being flipped over. Edmondson stated that Destruction Derby 2 felt like a new game rather than merely a sequel with more tracks.

Edmondson wanted to Americanise the game, as the original had a British banger racing feel. Therefore, the cars were designed to resemble the stock cars used in NASCAR racing, while all the tracks were situated in the United States. Edmondson also wanted appropriate music for American stock car races, so he attended races across the United States, where he noticed that metal music featured prominently. Thrash metal bands Jug and Tuscan were therefore chosen to compose the soundtrack, as some members of the team were involved with them. Because soft-spoken commentary would not fit with the soundtrack, commentator Paul Page was asked to serve as the game's announcer due to his "animated and excitable" style. Edmondson travelled to the United States to record Page at a studio in Indianapolis.

Variety and realism were focuses for the tracks: they featured visuals such as forests, Neon Cities, and Canyons, complete with obstacles. The team travelled to photograph the textures. The tracks were constructed in Softimage 3D and converted to PlayStation format mesh data using a custom tool. In response to a common criticism of the original Destruction Derby, the tracks were designed to be larger and less narrow. The team were inspired by Daytona's revolving windmills, and large jumps were implemented to add drama to the tracks. The most realistic aspect of the race tracks was the pit stop, although Edmondson stated that he limited players to one stop because the team did not want to detract from the action and because a penalty system would have added a lot of extra work. Cars nearing destruction were designed to behave in a realistic and unpredicatable fashion through effects such as losing the bonnet (hood) and catching on fire.