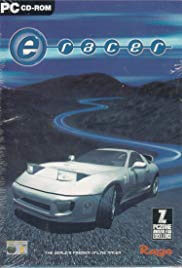 e-Racer is a video game for Microsoft Windows created by Rage Software. It is a GT arcade racing game in which the player competes against computer opponents or other human players online in eight different cars. The single player game consisted of an Arcade mode and a Championship mode, where one would have to race against 7 other computer opponents and would need to finish either first or second in each race in order to advance to the next round.

The original game contains 13 tracks in Championship mode and a bonus track which is unlocked upon completion of the Championship mode. All the tracks are playable in both the Arcade mode and Multiplayer modes.

In order, they are

Town Center - A road race through a town center and mall.

Scrapyard - Off road in a junkyard.

Freight Yard - A race through a freight train yard.

Chemical Plant - Balance of off road and on-road through a chemical factory.

Aircraft Carrier - Race through and on an aircraft carrier and adjoining port.

Stone Quarry - Off road race through a stone quarry.

Grim Up North - Road race through narrow streets of a small town.

Parking Lot - A race through a parking complex.

Indy Oval - Race on a NASCAR circuit, but also off-road in the center.

Hill Climb - Very snowy Circuit up and down a hill.

Fishing Village - Go through a village, its adjoining fort and beach.

The City - A race through a big city.

There are 7 cars, with the first two cars being unlocked upon installation, and the other cars are unlocked upon coming first in the races of Championship mode.

In order of unlocking, they are

There is also a bonus car called the "Sand Scorcher"

There are four liveries/decals for the cars, applicable to all the cars. The skins have "sponsors" stickered onto them.

A skin with white at the front and a checkered-flag type transition into blue at the back.