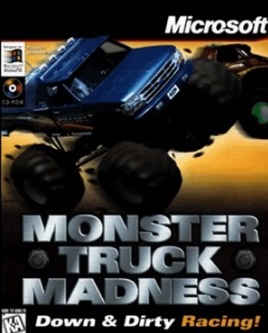 Monster Truck Madness is a racing video game developed by Terminal Reality and published by Microsoft for Windows 95. During development it was referred to as Heavy Metal Truck or by the internal codename Metal Crush.

A racing game, Monster Truck Madness allows players to select between the 12 real life monster trucks and compete with AI players in one of four modes - drag (based on PENDA Point Series), circuit, rally and tournament. It is also possible for human players to race against one another via DirectPlay.

A sequel to the original and released in 1998, Monster Truck Madness 2 (abbreviated as MTM2, codenamed Metal Crush 2) offers improved graphics, an updated interface, new trucks and tracks and the addition of variable weather conditions. However, the game engine is essentially the same as that utilized in the original game. A testament to their similarity is the fact that most custom trucks and tracks are compatible with both games.

In 2003, a new game called Monster Truck Madness was released for the Game Boy Advance. It was developed by Tantalus Media and published by THQ.

A reviewer for Next Generation called Monster Truck Madness "the one title that really seems to take full advantage of the Windows 95 operating system", citing impressive frame rates even without using graphics accelerator cards and a strong sense of speed. He criticized the physics as unrealistic but said the customizable settings allow players of all skill levels to set a satisfying challenge for themselves. Rebecca Anderson wrote in GameSpot that despite her perception of monster truck racing as crude and lowbrow, "I had a blast playing MTM." She praised the intensity of the graphics and gameplay, the numerous options, the use of a famous monster truck announcer for the commentary, and the ability to drive on tracks and surfaces not used in real world monster truck events, though she noted some graphical glitches.

Monster Truck Madness was nominated as Computer Games Strategy Plus's 1996 "Racing Simulation" of the year, although it lost to NASCAR Racing 2.