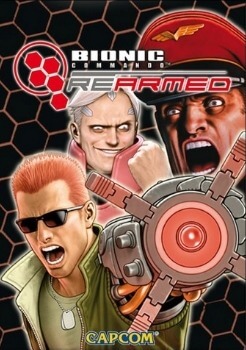 Rearmed follows Nathan Spencer, a commando with a bionic left arm that can extend and be used as a weapon, or to swing from various objects. Spencer is sent to destroy a weapon known as the Albatross project under construction by the Badds. The game was developed using Grin's Diesel engine and features in-game art by Shinkiro. Music for the game was composed by Simon Viklund and consists largely of remixed versions of the original music. The soundtrack was released on May 27, 2008 by Sumthing Else Music Works.

Rearmed was well received. Reviewers praised the fact that the game was true to the original, and lauded the updated gameplay and graphics. It was described by Hilary Goldstein of IGN as "the best downloadable game to date on Xbox Live Arcade and PlayStation Network." Jeremy Parish of 1UP.com stated Rearmed "should go down in history as one of gaming's best deals."

Bionic Commando Rearmed borrows its plot largely from the NES version of the game. In keeping with the North American release of that version, the references to the Nazi party found in the original Japanese title are not featured in Rearmed. However, as is the case in the original, the final boss of the game still clearly resembles Adolf Hitler, and is referred to as "The Leader".

Rearmed centers around two warring factions: the Federation and the Empire. It begins with the Imperial forces discovering classified documents regarding the development of a secret weapon known as the Albatross project, originally started by an organization known as the Badds, but never completed. Killt, Generalissimo of the Empire's forces, decides to complete the project himself. When the Federation learns of the Empire's plot, they send in their national hero, Super Joe to infiltrate the Empire. During his mission, Joe is captured by Imperial forces. The Federation sends in a second operative named Nathan Spencer to rescue Super Joe and assist him in completing his mission.

Spencer traverses several areas, eliminating many Imperial leaders along his way. As he progresses, he finds new technology and travels deeper behind enemy lines. The plot culminates as Super Joe is rescued from the bionic Imperial soldier Gottfried Groeder, and both Spencer and Joe set out to destroy the Albatross project. During the mission, Spencer encounters "The Leader", the resurrected head of the Imperial forces. Spencer defeats The Leader, and together with Super Joe destroys the Albatross. The game ends with both heroes hanging onto a helicopter, flying off as the Albatross explodes.

In Bionic Commando Rearmed, the player controls Nathan Spencer, a soldier who has been given a bionic arm. The arm is equipped with several features including a grappling hook which can be used to reach distant objects. The player uses Spencer's bionic arm to swing across gaps or climb to higher ledges. Often, the player must make a series of grappling actions in a row to successfully traverse hazards such as a wide gap or an electrified floor.

Spencer earns a variety of weaponry and items by defeating level bosses. Some items and weapons must be acquired before certain areas can be entered: for example, the player must locate flares that can then be used to illuminate dark areas. Levels are presented to the player as an overworld-style tactical map showing friendly and enemy areas. The player controls a helicopter to move between areas, and can then select to infiltrate that area on foot. While in the overworld view, enemy convoys will also move between areas. If the player's helicopter encounters a convoy, the player must fight through it on foot and destroy the enemy anti-air truck before the helicopter can proceed. Such levels are presented from a top-down perspective.

While Bionic Commando Rearmed remains mostly true to its NES counterpart, a number of gameplay enhancements were made. A health bar replaces the game's original health system of a limited health pool which grows after collecting bullets from defeated foes. Players collect health items from enemies to restore health, as opposed to the original system which involved earning more hit points. Defeating enemies with full health now awards players extra points, encouraging players to avoid being hit in order to obtain high scores. Players can extend Spencer's bionic arm to grab oil barrels and throw them at enemies, or use them as temporary shields. Weapons can now be changed instantly during gameplay, as opposed to being limited to one weapon per mission. Boss battles have also been redesigned. Each battle now makes unique use of Spencer's weaponry and bionic arm. In one example, the player must latch the arm to a screw on the boss character's vehicle, then pull back to expose a weak point in the armor. Additionally, the final boss battle has been extended to a complete level as opposed to the ending sequence of one. Hacking into enemy communications now involves navigating a three-dimensional puzzle as opposed to simply choosing to hack. New to the remake are Challenge rooms which involve using the bionic arm to traverse a course as quickly as possible. Force feedback has been implemented when using the bionic arm, firing weapons, and other events.