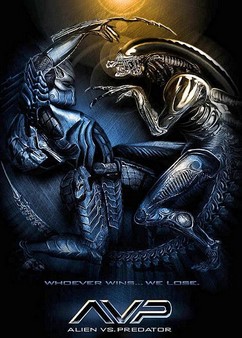 Like the 1994 Alien vs Predator game for the Atari Jaguar, Aliens versus Predator offers three separate campaigns, each playable as a separate species: Alien, Predator, or human Colonial Marine. Each player character has different objectives, abilities, and weapons. The single-player campaign presents the player with a conventional series of levels to progress through that are designed around the abilities of each character.

As the Colonial Marine the player uses a number of weapons to combat Aliens and Predators. The marine wears armor for protection and uses an image intensifier and flares to improve visibility in dark areas.

When playing as the Predator the player uses a variety of weapons from the Predator films such as wrist blades, a throwing disc, and shoulder-mounted energy weapons. The Predator is the most durable of the three player characters and can survive falls from greater heights than the human. The player can use a cloaking device to become invisible and several different modes of vision to detect enemies, including an infrared vision mode and a mode sensitive to electrical systems.

As an Alien the player can explore most of the game's environments freely, even climbing across walls and ceilings. The Alien has no weapons, however, using its claws, tail, and jaws to attack enemies. The screen is distorted into a fisheye lens effect to reflect the Alien's field of view. The player can also use a form of echolocation in dark areas and can detect pheromones to discern human or Predator enemies. The Alien can drop from any height without injury and is the fastest of the three player characters.

The storylines of the three player characters are independent of one another. As an Alien the player must defend the Alien hive from human marines, then stow away on an evacuating spacecraft and reach the marines' ship, the Ferarco. When the Ferarco's self-destruct system is activated, the player must reach the escape shuttle, which takes them to Gateway Station. Here the player explores the station and battles more marines, reaching a ship departing for Earth. Before boarding the ship the player battles two Predators, after which the Alien enters the Earth-bound shuttle.

When playing as the Colonial Marine, the player begins at a research station on LV-426 built to study the derelict spacecraft where the Nostromo crew first encountered the Alien eggs in the film Alien (1979). Aliens attack and the player must fight their way through the research facility, the derelict ship, and an adjoining colony. Next the player explores the atmosphere processing station and shuts down its cooling valves in order to cause an explosion which will wipe out the Aliens. The player character escapes in a drop ship and travels to Odobenus Station in orbit above the planetoid, where they battle more Aliens, Predators, facehuggers, and cybernetically-enhanced Aliens until reaching the spaceship Tyrargo. Aboard the ship the player battles more enemies including an Alien/Predator hybrid and "praetorian" Aliens. The player then battles an Alien queen, defeating it by expelling it through the airlock.

The Predator character's storyline visits three different planets, beginning with the player hunting marines in order to recover a captured Predator ship and its occupant from a human military base. Aliens are accidentally released in the base and the player discovers that the humans have created an Alien/Predator hybrid by implanting the captured Predator with an Alien embryo. The player defeats the hybrid, triggers the facility's self-destruct mechanism, and escapes in the Predator ship. The player next visits Fiorina "Fury" 161, the prison planet that is the setting of Alien 3 (1992), where more Aliens and marines are battled. Finally the player visits a marine-controlled Alien habitat, battling cybernetically-enhanced Aliens, "praetorian" Aliens, and finally the Alien Queen.

Aliens versus Predator was developed by Rebellion Developments and published by Fox Interactive. It was announced in 1995 for release during the 1997 Christmas season on the PlayStation, Sega Saturn, and PC. However, the PC version was pushed back to 1999, while the Saturn and PlayStation versions were scrapped altogether, though the PlayStation was showcased in an early state during E3 1997. The Saturn version was not displayed at the show, though Rebellion was still planning a release for the system at the time. A version for the Dreamcast was also in development but never released.

An expansion pack titled Millennium Expansion Pack was released in 2000. It adds nine levels for single- and multiplayer, the ability to save within levels and new weapons for the marine. A compilation package titled Aliens versus Predator: Gold Edition was also released in 2000. It contains the main game and the expansion. An Apple Macintosh version, for OS X and classical Mac OS, based on the Gold Edition was released by MacPlay in 2001. A version for Game Boy Advance was developed and published by Ubisoft, but eventually canceled.