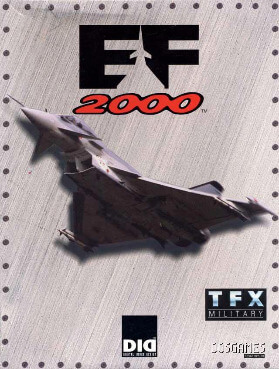 EF2000 is a combat flight simulator video game developed by Digital Image Design and published by Ocean Software in 1995 for the PC DOS. It is the sequel to DID's earlier software title, TFX.

MFDs allow player to attack both flying and grounded targets with a range of weapons, including precision-guided munitions, missiles and unguided bombs. Spot view allows for remote viewing of targets, enemies, friendly forces or the player's own EF2000. With padlock, the computer could lock onto a target and follow it around the cockpit even when the target maneuvers from in front of the player's aircraft.

On release, a Next Generation critic called the game "one of the best flight sims on the market", applauding the realistically texture-mapped graphics, easy-to-learn interface, intelligently responsive AI, and multiplayer networking.

EF2000 won Computer Gaming World's 1995 "Simulation of the Year" award. The editors praised it for combining "a high level of realism with fun", and noted its "ground-breaking terrain and aircraft graphics". In 1996, Computer Gaming World also ranked it as the 42nd best video game of all time for making combat simulation graphics, sound, and realism take "a flying leap forward."

That same year, Next Generation ranked it as the 43rd top game of all time for being "simply the most immersive combat flight sim on the market." PC Gamer nominated EF2000 as the best simulation of 1995, although it lost to Apache. It was also the second-place finalist for Computer Game Review's 1995 "Simulation of the Year" award, which went to MechWarrior II.

EF2000 spawned later versions with various improvements, including EF2000 V2.0 for Windows 95 and Super EF2000 with the Tactcom additions for Windows 95 (both compatible with Windows 98, 98SE and ME). The graphics were boosted when Digital Image Design (DID) released the "Graphics+"-Patch, which added Rendition Vérité hardware support and Glide API for 3dfx graphics card support to EF2000.

In addition DID Simulations followed up with games based on the F-22 - first with F-22: Air Dominance Fighter and F-22 Total Air War.

The EF2000 series came to an end in 2001 when Rage Games Limited released Eurofighter Typhoon. It was developed from the makers of EF2000 and has the Digital Image Design label on the box.