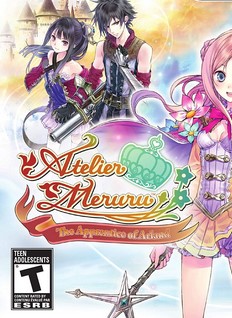 Atelier Meruru: The Apprentice of Arland (メルルのアトリエ～アーランドの錬金術士3～ Meruru no Atorie: Ārando no Renkinjutsushi 3, lit. Atelier Meruru: The Alchemist of Arland 3) is a Japanese role-playing video game developed by Gust Co. Ltd.. It was released for PlayStation 3 on June 23, 2011 in Japan. Atelier Meruru is the thirteenth installment in the Atelier series, and it continues the series' emphasis on item creation and synthesis. It is the third game in the Arland series and a direct sequel to Atelier Totori: The Adventurer of Arland. It went out of print after a month due to being mis-rated, only being re-released after CERO applied a C rating days later. It is notably the last title that Gust self-published before merging with Tecmo Koei. A PlayStation Vita version titled Atelier Meruru Plus: The Apprentice of Arland was released on March 20, 2013 in Japan.

A port of the game titled Atelier Meruru DX for Nintendo Switch and PlayStation 4 was released on September 20, 2018 in Japan, and on December 4, 2018 in the West along with an additional Microsoft Windows release worldwide.

Meruru is the princess of Arls, a little kingdom situated in the far north of the Arland republic. After her father and Gio, the leader of Arland, discussed the merging of the two lands, she met Totori, the now-graduated alchemist. Dazzled by the power of alchemy, and with a desire to help her country prosper, she forced herself on Totori as her first student. Her father initially disapproves of this decision but agrees following a suggestion from Rufus. He gives Meruru a directive to use her alchemy to improve the kingdom, with several intermediate goals which must be met within specific time periods in order to be allowed to continue her alchemy work. Later, Rorona joins the two, but she has been turned into a child by Astrid after drinking an experimental potion of youth.

Reviews have generally praised the game's reiteration of the series' iconic crafting system, but opinions on other aspects of the game have been mostly mixed or negative. Tech-Gaming enjoyed the title's streamlined mechanics and plotline which focused on a kingdom development, finding that Atelier Meruru offered a "pleasing and poignant conclusion to the perpetually cheery series".

Metacritic reviewers gave the game a composite score of 66 out of 100, criticizing the niche qualities of the plot and gameplay, the story's lack of serious conflict and the game's fan-service orientation. The Vita port was received more positively at 74 out of 100, with reviewers citing the series' compatibility with mobile platforms in addition to "a better sense of pacing, more content, and free DLC."

IGN gave it a 6 out of 10, praising its gameplay and visuals, but criticized the story, voice acting, the lack of any central conflict, and uninteresting characters.

GameSpot gave it a 5 out of 10 for its crafting system but disliked the story, characters, emphasis on cuteness, and sexualization of its female cast.

EGM gave the game 7.5 out of 10, praising the alchemy system, character designs, and quirky character interactions, but found issue with the combat and occasional fanservice scenes. A second review five days later gave the title a 7 out of 10.

RPGamer gives the game 4 out of 5, making note of the game's crafting, character interactions, and graphics as strong points, but felt the main story and music were not as strong as they could have been.

(0) Comments on "Atelier Meruru: The Apprentice of Arland Full Version"