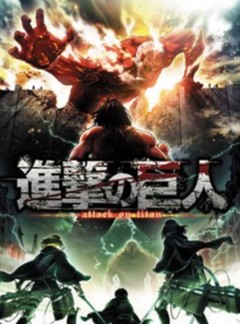 Attack on Titan (Japanese: 進撃の巨人 Hepburn: Shingeki no Kyojin), known in PAL regions as A.O.T.: Wings of Freedom, is an action hack and slash video game based on the animated series Attack on Titan, which is based on the Hajime Isayama's manga series of the same name, released for PlayStation 3, PlayStation 4, and PlayStation Vita in Japan. It was released on February 18, 2016, in Japan. On April 7, Koei Tecmo announced a Western release in North America and Europe for August 2016. Microsoft Windows and Xbox One versions were also revealed. On August 21, 2017, Koei Tecmo America confirmed that Attack on Titan 2 has been set for a 2018 release.

The game retells key moments from the Attack on Titan manga (chapters 1 through 33), which are also covered by the first season of the anime series, in addition to new scenarios involving the key characters.

In 845, when Eren was just 10 years old, the "Colossal Titan" suddenly appeared. Large enough to breach the Wall, it allowed other Titans to rampage through the city. One of them ate Carla, Eren's mother. With the so-called "Armored Titan" now preventing access, Wall Maria was abandoned and humanity were forced to fall back to Wall Rose. Having lost his family, his home and his dreams, Eren swore revenge on the Titans. Aiming to become a member of the Scout Regiment, he joined the "104th Cadet Corps."

Five years after Eren enlisted, the "Colossal Titan" suddenly appeared again. Eren tried to fight it alone but failed to defeat it. He returned to headquarters and then takes a squad out himself, but the mission was a failure with Eren suffering a terrible injury to his leg and many soldiers being killed. When Armin was about to be eaten by a Titan, Eren sacrifices his life to save him. Immediately before the Trost District Wall was destroyed by the Colossal Titan, elite members of the Scout Regiment were on a mission outside the Wall. The principal role of the Scout Regiment was to scout beyond the Wall, seeking a way to take back Wall Maria which was lost 5 years previously. Setting up supply bases in destroyed towns and villages, they sought to secure a route for a large force to make their way to the Shiganshina District, where the Wall was destroyed. Fighting with the Titans outside the wall as they go, they sought to secure the route while making new discoveries along the way.

The brave resistance offered by the Garrison Regiment, combined with the return of the Scout Regiment, was enough to keep Wall Rose safe from the Titans. Within the Walls, however, the same chaos descended as was experienced when Wall Maria was lost 5 years previously. Not only has the Colossal Titan attacked humanity again, but the damaged Wall has been repaired - unbelievably - by the "power of the Titans." Is Eren an ally for humanity or just another enemy? As the debate continues within the Walls, the Scout Regiment - newly joined by Eren - begin their 57th mission to the outside world.

The game's visuals matches that of the anime series and it features one player fighting multiple enemies. The 3D Maneuvering Gear can be used to ascend to high areas.