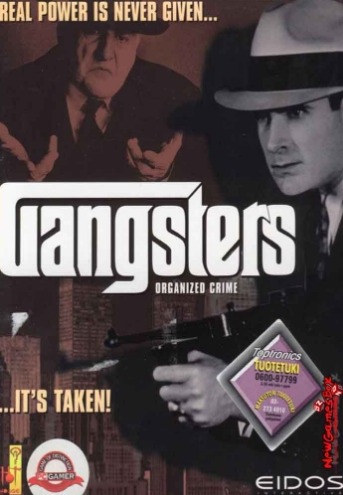 
Gangsters: Organized Crime is a strategy game by Eidos Interactive for Windows, first released in 1998. and re-released in 2012 on GOG.com. It is set in the fictional Chicago suburb of New Temperance in the Prohibition era. A sequel, Gangsters 2: Vendetta, was released by Eidos in 2001.

Gangsters is played by alternating between turn-based and real time gameplay. At the beginning you give orders to the gangsters (or 'hoods') under your control, which are then played out in front of you during the real-time aspect of the game (the working week).

To have any chance of winning the game, you must begin expanding your territory by giving your hoods the order to extort businesses into paying protection money to you every week (which must be collected). You will also have to begin recruiting more hoods for your gang as soon as possible by giving your hoods the recruit order. Additional hoods can be recruited from gyms, pool halls, cafés, the docks and the unemployment office.

The hoods have many different attributes such as intelligence, fists, knives, etc. which make them suitable for different missions. A hood with high knife skill and low fists skill may inadvertently kill someone he was merely sent to beat up, for instance. Hoods can be promoted to lieutenant, which gives them the ability to lead teams of hoods. It is also possible to hire a lawyer and an accountant. There are different automobiles and weapons that can be purchased to aid in carrying out missions.

To aid the needs of the mob, the player will need to administrate their mob's activities to bring in money. This can be done through the purchase of businesses (Both Legal and Illegal), a protection racket, raiding businesses and bribing/employing the appropriate people to ensure they do not get in trouble. A lawyer can keep the player's hoods out of jail while an accountant can cover all the illegal money the player makes, evading tax and auditing the player's businesses incase the hoods running them are stealing earnings from the player's business. The FBI can become involved with investigating illegal businesses, if they aren't run well enough to conceal them, resulting in costly shutdowns and heat toward the player.

The game has 3 victory conditions with varying degrees of difficulty, from easiest to hardest.

Go Straight: This requires the player to get a good lawyer and pull in a good sum of purely legal money from businesses owned, no hoods wanted by police and no "heat". Eventually the player can choose to drop the life of crime that paved their way and be legit with their new business empire. Rival gangs are the main threat to this goal as their movement on the player's territory can draw the player back to crime to retaliate or defend.

Get elected Mayor: This requires the player to secure mayor of the city, requiring a good lawyer, lots of money, territory and a winning vote. The player needs to keep their potential voters happy through low protection costs and high security with charitable causes from the player setup like soup kitchens. Owning a teamsters illegal business can give a substantial boost to votes too.

Domination: This is the hardest yet least complex way to win, destroy all rival gangs through force. The difficulty comes from the potentially huge amount of heat from the police as the player's hoods war with the enemy with huge bodycounts being brought up each week in addition to buildings being attacked, torched or blown up. Sometimes killing the enemy leaders isn't enough as, unlike the player, another hood from their gang can step up to take over for them, leading the player to need to seek out and destroy their offices.

Gangsters: Organized Crime was commercially successful. In the German market, it debuted in ninth place on Media Control's computer game sales rankings for the latter half of December 1998. The game proceeded to secure positions 8 and 11 for the first and second halves of January, respectively. Worldwide, Gangsters sold 350,000 units by June 1999. This performance led Hothouse to begin production of a sequel, Gangsters 2. Sales of the game rose to 500,000 units by November. Hothouse attributed the majority of its sales to Germany, the United Kingdom and the United States.

Next Generation reviewed the PC version of the game, rating it four stars out of five, and stated that "While there are some interface problems, a few design holes, and a sketchy manual, once players master the complex game interactions, Gangsters becomes exactly what fans of this genre look for – something that keeps them up late at night."