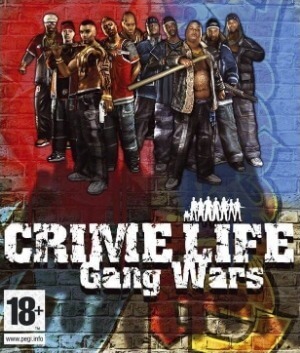 
Crime Life: Gang Wars is a video game released for Microsoft Windows, PlayStation 2 and Xbox. The game is a fictionalized simulation of gang wars, with the game play focused on street fights involving many gang members at once. Weapons include baseball bats, lead pipes, hammers and guns. The game includes over 25 story-mode missions, as well as some free-play missions. Free roam is also available as in the popular Grand Theft Auto. The areas are relatively small but can prove useful when trying to locate your fellow gang members. The game features harsh language and violence is definitely a staple of it. The game's music is all hip-hop, reflecting the urban and hip-hop atmosphere of the game. There are various methods of earning money, ranging from mugging to burglaries. The soundtrack of the game is provided by the hip-hop group D12, which also contributed the likenesses and voices for some of the game's key characters.

This game has been cited for combining free-roam elements similar to Grand Theft Auto, and beat 'em ups similar to Final Fight.

The player starts off as Tre, a citizen of the impoverished Hood district in Grand Central City. As a Hood resident, his dream is to become a member of the Outlawz, the local gang. In order to get accepted by the gang boss, Big Dog, Tre will have to run a few missions that involve killing some people, and he'll soon find himself a bona fide Outlaw with a few gang members that follow him around.

During press release developers stated that the game's main theme is "The player must protect his own people from exploitation and abuse, and defend his crew from violence and treachery that permeates the society he lives in."

The game takes place in the fictional Grand Central City, which is in turmoil due to rampant gang wars. The protagonist, Tre, is a rookie member of the Outlawz, who were once the most powerful gang in the city but are now threatened by a rival gang known as the Headhunterz. Tre's mission is to restore the Outlawz to their former glory.

Upon discovering that the Outlawz' leader is planning to abandon them to join the Headhunters, Tre attacks and kills him and takes his place as the head of the gang. The story ends with Tre killing each Headhunter, including their leader. The game ends on an ambiguous cliffhanger because during his last fight he is fatally shot at close range but when the police arrive, his body is gone, indicating that he possibly survived.