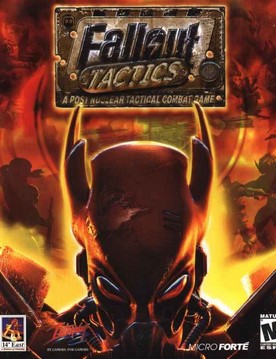 Fallout Tactics: Brotherhood of Steel is a turn-based real-time tactical role-playing game set in the post-apocalyptic Fallout universe. Developed by Micro Forté and published by 14 Degrees East, Fallout Tactics was released on 14 March 2001 for Microsoft Windows. It sold above 300,000 units worldwide by 2008.

The game follows a squad of the Brotherhood of Steel as it becomes engaged in a desperate war. Although the game takes place in the Fallout universe, it does not follow or continue the story of either Fallout or Fallout 2. Fallout Tactics shipped with a bonus CD when it was pre-ordered. The bonus CD included Fallout: Warfare, a table-top miniatures game based on the Fallout universe, as well as a bonus mission for the main game.

Unlike the previous two Fallout games, Fallout Tactics emphasizes tactical combat and strategy. Players have much more limited interactions with non-player characters, but they can still trade with them, and some missions include dialogue. Instead of towns, Fallout Tactics centers around Brotherhood bunkers and missions. The bunkers serve as a central point for the Brotherhood, and players can obtain the services of quartermasters, mechanics, personnel yeomen, and medics. Characters from completed missions occasionally visit the bunkers.

After receiving a mission briefing from the general in charge of the bunker, the player's squad can then move to the area where the mission will take place. Although this is usually a town, it can also be a factory, military encampment, or a Vault. There, the player is given a map of the area marked with objectives and notes.

Combat in Fallout Tactics is more complicated than in the previous two Fallout games. Unlike those, which featured an individual turn-based system, Fallout Tactics features three modes of combat: Continuous Turn-Based (CTB), Individual Turn-Based (ITB), and Squad Turn-Based (STB). In CTB, everyone can act at the same time, and action points are regenerated at a rate based on Agility. ITB is the system used in the original games. STB is a variation of that; each turn is given to a squad. Other changes include the ability to change stance, modifiers for height, and setting sentry modes, which let characters shoot automatically in CTB upon encountering an enemy.

Fallout Tactics is the first Fallout game to feature a multiplayer mode. In this mode, each player controls a squad of characters and faces off against opposing players. During game setup, players are granted a number of points with which to purchase squad members and gear.

With nuclear apocalypse looming over the world, several vaults were constructed to contain the best and brightest of humanity. By being shielded from the imminent death, the offspring of these people could reclaim and repopulate the Earth. However, before the entire network could be completed, nuclear war broke out. One of the military vaults located in California emerged from the war determined to restore civilization. Using their superior weapons, they were able to reclaim the surrounding wasteland. The members of this vault formed the Brotherhood of Steel, an organization dedicated to restoring civilization and reclaiming or developing new and better technologies.

A split soon formed in the Brotherhood, however. One faction supported allowing tribals (human outsiders) to join the organization to prevent a lack of troops. The other faction wanted to keep the Brotherhood pure and not accept outsiders. The faction against expansion won out, and the other faction was sent across the mountains on great airships to destroy the remnants of the mutant army defeated in the first Fallout game. A lightning storm struck down the ships, however, and they were dispersed and forced to crash-land. One of the surviving airships crashed near the ruins of post-war Chicago. After regrouping, and free from the Brotherhood members in California who wanted nothing to do with the tribals, the crash survivors established a first base near Chicago and founded a new Brotherhood that would grow and expand by recruiting outsiders and expanding across the land.

When the game starts, the Brotherhood is trying to claim territory surrounding Chicago. By offering protection to villages of tribals, the Brotherhood is able to draft recruits from among the tribals. At the beginning of the game, the player character is an Initiate, a new recruit to the Brotherhood, tasked to lead a squad of soldiers made up of available initiates. Raiders in the area are the first challenge to the Brotherhood's authority, so the player's squad of initiates is dispatched to kill the bandit leaders and mop up the bandit threat. As the campaign against the raiders succeeds in dispersing them into the wasteland, the player character is accepted fully into the Brotherhood, and learns the eventual goal of the Brotherhood — a campaign west across the Great Plains towards the Rocky Mountains in search of Vault Zero, the one-time nucleus and command center of the pre-war Vault network, where the most senior government, scientific, and military leaders were housed, and the highest technology available was maintained.