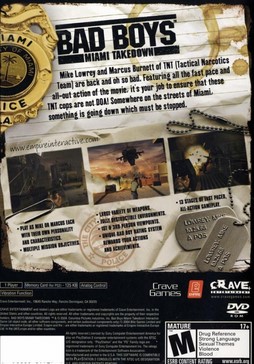 
Bad Boys: Miami Takedown, also known as Bad Boys II in Europe, is a video game released in 2004 based on the action-comedy movie Bad Boys II. It was released in early 2004 after the film's DVD release.

The player takes the role of Miami Police Department detectives Marcus Burnett and Mike Lowrey over alternating levels, meaning that the player plays level 1 with one character, plays level 2 with the other, then plays level 3 with the first, and so on. The game contains five acts, each containing several levels.

The game starts with a deal taking place between the game's villains. A drug lord known as Tulio Mendoza is infuriated after being ripped off by a Russian businessman named Akimov. The two settle their problems and join forces. Meanwhile, two TNT agents, Ray Jackson and his partner, Lee-Ann Reid, are going to a diner. Jackson sits in the car, while Reid walks inside. While sitting at the counter, the car explodes with Jackson inside and Reid is captured by a gang known as the Baby Demons.

Burnett and Lowrey are sent by Captain Howard to rescue the surviving agent and take out the Baby Demons gang. They succeed in rescuing Reid, though not much to Burnett's surprise, who happens to have history with her. Later, the duo are sent to an abandoned house being used as the Baby Demons' hideout, and they soon find the leader: Bossu Williams. Burnett engages the gang leader in a shootout, who later escapes.

Tatiyana Savin, Akimov's assistant, attempts to get Bossu involved with Mendoza in exchange for Baby Demon territory. Bossu declines, and begins ranting, until he is killed by Tatiyana after calling her a "commie". Then, the Baby Demons rob a bank, and Lowrey and Burnett are sent to suppress them. Afterwards, Tatiyana takes advantage of the bank robbery and attempts to escape, but crashes her car. She then attempts to escape on foot through the Miami alleyways as Lowrey and Burnett give chase, fighting their way through the remaining Baby Demons gangsters, and eventually find themselves up against the Russian Mafia, who have arrived to cover Tatiyana's escape. The two split up; Burnett going through the Little M's restaurant, and Lowrey going up to the roof. While Burnett is cut off, Lowrey pursues Tatiyana across the Miami rooftops, fighting his way through the Russian Mafia. Tatiyana boards her gunship and uses it against Lowrey. Initially, the helicopter has the upper hand, but Lowrey prevails and manages to destroy the helicopter, killing Tatiyana. The TNT duo regroups and plans their next mission at an art gallery.

Mike and Marcus are sent to the Ellipse Modern where they attempt to find out about its connection with the Russians, and it is revealed that it is owned by Kirill Akimov, the guy whose money was torched by Marcus. Burnett goes on alone and manages to take control of the art gallery's security room, spying on Akimov and Jabuti Siro, Mendoza's bodyguard, discussing a deal taking place at the docks. Lowrey uses a silenced weapon to go through another part of the art gallery and find out what the Russians are doing. Eventually, the two become suspicious and think the Russians are guarding something else, which is later revealed to be a drug laboratory. Lowrey destroys the laboratory, and makes an explosive escape, ending up being outgunned by heavily-armed Russians. Burnett comes to his partner's aid, as the duo fights their way out of the art gallery.

Mike, Marcus, and Lee-Ann set to the docks to eliminate Akimov. Burnett goes in alone, while Lowrey provides sniper support, with Reid spotting. Burnett makes it inside, and overlooks the deal between Mendoza and Akimov. While doing so, he soon finds out that Jackson, the agent who was presumably killed in the car explosion early in the game, is still alive, and is working with Mendoza. Burnett fights his way out of the warehouse, battling not only the remaining Russian Mafia, but the newly arriving Colombian Cartel. Lowrey hands Burnett his sniper rifle, while he goes onto Akimov's boat. On it, Akimov appears, holding Lee-Ann hostage. Running out of options, Marcus, with correct timing and patience, manages to snipe Akimov. Lee-Ann reveals that she put a tracker on Mendoza's boat, and the three give chase.