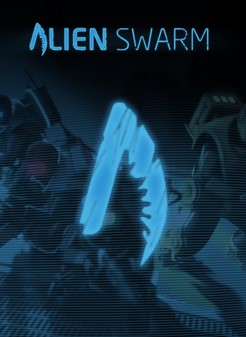 Alien Swarm is a freeware, multiplayer, top-down shooter video game by Valve Corporation. It is a remake of a mod for Unreal Tournament 2004, and it was developed by the original team, who were hired by Valve Corporation during the course of the development process.

Alien Swarm is a top-down shooter set at a 60-degree angle. Four players can join a single co-operative game, the aim of which is to progress through science fiction-themed levels while eliminating waves of aliens. Players can choose from 40 different pieces of equipment, ranging from weapons like assault rifles to grenade launchers and offhand items like mines and healing beacons. The game includes persistent statistics, unlockable equipment, and achievements.

The game is class-based, with players choosing from the roles of Officer, Special Weapons, Medic, and Tech. Each class has two selectable characters, differentiated by their abilities.

Before the mission, players can change their character's loadouts and offhand items. They can also view both the mission information and the other players' loadouts. In single player, the player can modify all of their characters' loadouts. The mission involves all four players advancing in the same general direction, often with multiple objectives to accomplish. As they advance through the level, they will move through many different rooms and pass many different obstacles, from poison gas to reinforced doors. These obstacles are cleared through a variety of methods, from welding to shooting to hacking. Meanwhile, many aliens (known as Swarm) will attack the players from all sides. Swarm can spawn unpredictably, and will often attack the players with mobs of enemies, as described by their name. There are many different types of Swarm, with different behaviors and attack patterns. Players can fight Swarm using many tools, including weapons, explosives, or using environmental hazards (e.g. explosive barrels).

Players have four slots: a character slot (determining abilities, perks, and class-specific weapons), two weapons slots, and an offhand item slot. The character slot allows the player to choose between one of the eight characters, who each have certain buffs (i.e. extra damage, faster reload, etc.) and class-specific weapons and items (shotguns, autoguns, ammo crates, etc.). Players can equip two weapons in the weapon slots, as well as certain items or utilities. Offhand items (such as explosives, flares, and medkits) can be equipped in the offhand slot.

In the game's only official campaign, Jacob's Rest, a swarm of invasive aliens have taken over a colonized planet in December 2052. Marines deployed by the Bloodhound dropship arrive to search for survivors and, if need be, to destroy the colony to prevent the aliens from spreading. The task force kills a large number of not only "normal" Swarm aliens, but alien eggs, large tumor-like growths, parasites and other creatures. They soon find out that the colonists have all been killed by the alien infestation. The marines then guide a thermonuclear bomb (originally meant for excavation purposes) through the complex and activate its timer. They return to the drop ship before the bomb detonates.

Alien Swarm was originally a mod for Unreal Tournament 2004. The mod was Mod of the Year for GameSpy in 2004, and was a runner-up for Computer Games Magazine's 2004 "Best Mod" award, losing to Red Orchestra: Combined Arms.

In July 2010 with the announcement of Alien Swarm, it was revealed that Valve had hired the team behind Alien Swarm, who had finished the mod between working on other Valve products such as Left 4 Dead and Portal 2.

An Alien Swarm software development kit (SDK) including buildable source code was released alongside the game. It is free to all users of Steam, rather than only to owners of existing Source games (as is the case with the 'mainline' Source SDK). This allows total conversion mods, which do not rely on content from other Valve games, to be free to all as well - a significant business decision that echoes the strategy of the Unreal Development Kit. The SDK and software license allows arbitrary usage and sharing but only for non-commercial purposes.