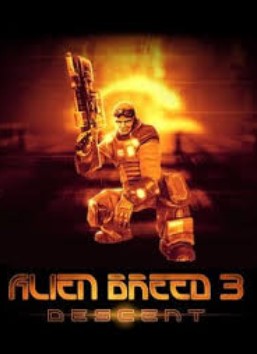 Alien Breed 3: Descent is the sequel of Alien Breed 2: Assault and is the third and final installment of the episodic remake of the Alien Breed series.

Conrad fight with Klien AI inside MIAs body, after beating Klien, MIA is disembodied but regains her conscience, she then tell Conrad the only way he can destroy Klien maniacal AI by used her brain core as EMP device to fry him. After several hours of falling to Frozen with Ice planet and then drown into it waters, Conrad encounter the Alien Queen which was created by Klien and that he is overjoyed with his creation, Klien says it took him about a hundred years to create a controllable Queen, Klien tells Conrad that he copied him self to Leopold spaceship and about to leave with out Conrad, after a battle with Queen Conrad continue his crusade into Klien mainframe lair, where he battle him and his still alive Alien Queen, in the heat of battle Alien Queen falls at Klien AI mainframe and destroy important tech in order for Klien to operate therefor opening a small control room, Conrad uses EMP which MIA gave him and fry Klien for good...in the aftermath we see Conrad finally attending his should wound and taking a nap, a small pad falls on the ground, pad starts to show the image logo of Klien Eye and we can hear Klien talking...but can't hear what he is saying.

Alien Breed 3: Descent, like Evolution and Assault, is a shooter set on board a futuristic spacecraft. In each level, the main character Conrad is given a series of tasks such as collecting key cards, restoring power to various systems, and clearing rooms of hazardous substances (e.g. halon gas or excess water). All tasks must be completed before finding that level's exit in the form of an elevator. Standing in his way are a variety of aliens who will attack him, usually en masse. He can also suffer damage from explosions, fires, electrical disturbances, and enemy turrets. Conrad can run and shoot in all directions, and can collect a number of different weapons and items to aid him. He can also purchase additional ammunition, items, and upgrades from shops found at computer terminals which also function as save points.

The camera angle can be rotated manually in 45 degree increments. Data pads are spread throughout the game, which when collected, reveal information on the various alien species encountered throughout the game and provide back stories for the game's characters. The game features a "survival" mode in which players might survive for as long as they can against waves of aliens while using whatever weapons and items they can find around the area. This mode is available in single-player and co-op modes.