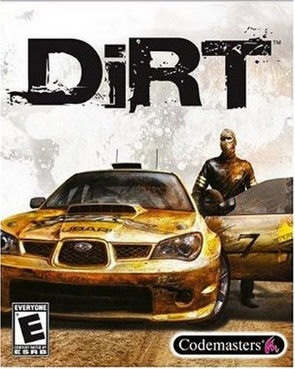 Colin McRae: Dirt (or simply Dirt, stylised as colin mcrae DiRT) is a racing video game developed and published by Codemasters for Microsoft Windows, Xbox 360 and PlayStation 3. It is the sixth game in the Colin McRae Rally series and the last of the series to be published before Colin McRae's death. It features new graphics, audio, physics engine, new vehicles and a new game engine which was co-developed between Codemasters and Sony Computer Entertainment. The game features a variety of off-road racing categories as well as World Rally Championship style events. The game was released for the PlayStation 3 in Europe on 14 September 2007, prior to Colin McRae's death. The sequel, Colin McRae: Dirt 2, was released in September 2009. A simplified version of the game was developed by Glu Mobile and released for Java ME devices in 2008.

The single player game plays out through three modes. Career, Championship, and Rally World, which is a single race set up.

The Career mode is set up in a stylized pyramid that has 11 "tiers", with the bottom tier having 11 different events. Each event consists of one or more race events of a single type requiring a specific type of car. The player earns up to 10 points for their placing in all the races within the event. Most events require a specific number of points within a specific tier to unlock, and thus as the player earns points, more of the pyramid becomes unlocked, moving up to the "Champion of Champions" event at the very top. By winning races and earning money the player is able to purchase cars and liveries (skins) for the cars. In total there are 46 different cars and 186 liveries. The amount of money earned is based on the difficulty level picked by the player when selecting the event; higher difficulty levels have more challenging AI opponents and more realistic damage effects. Completed events can be repeated at any time, although unless challenged at a higher difficulty level, the player will earn significantly less money than when they first raced it. In Rally events with multiple races, the player has the opportunity to repair damage between races, but is only allotted 60 minutes of damage repair at each point based on time estimates to fix each component of the car.

Championship mode offers up a series of races in which the player's combined time throughout each stage is cumulative.

Multiplayer allows the player to race up to 100 other players in rally races through solo competition, as there are no other cars, ghosts or players present on the track. Fastest time determines who wins.

Colin McRae: Dirt was released on 15 June 2007 in Europe and on 19 June 2007 in North America for the Xbox 360 and PC. The PS3 version was released on 11 September 2007 in North America and on 14 September in Europe, the day before a helicopter crash claimed the life of McRae, his son Johnny, and two other people who were family friends of the McRaes. In response to the death and after an agreement was made with the McRae family, Codemasters withdrew a major advertising campaign for the PlayStation 3 version of Colin McRae: Dirt.

500,000 copies were sold worldwide in the first week of release. The game was selected as part of Gaming Target's year-end "52 Games We'll Still Be Playing From 2007" list.