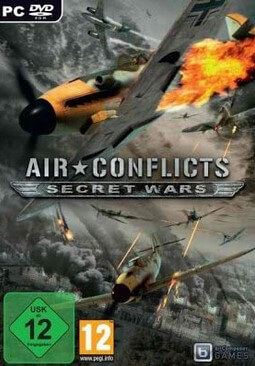 Air Conflicts: Secret Wars is an arcade combat flight simulator video game set in World War I and II. It was developed by Slovak studio Games Farm and published by bitComposer Games. It was released on 30 September 2011. It is a sequel to the original 2006 Air Conflicts. It was ported to the Nintendo Switch in March 2019 as part of a collection with Air Conflicts: Pacific Carriers.

The player controls a female pilot named Dorothy Derbec, nicknamed DeeDee, who is trying to solve the death of her father, Guillaume Derbec. Alongside with her friends Tommy Carter and Clyde, the players progress through the game. From Tobruk to Russia to Balkans and finally to Berlin, Tommy and Clyde both die while progressing. And the Berlin campaign, she finds out that one friend killed her father in WW1 because her father couldn't stand watching bombers drop chemical gas on a village. While progressing, the player unlocks airplanes, ranging from classics such as the Spitfire to experimental planes like BB-1 and Horten Ho 229.

All games from the serie "Air Conflicts"